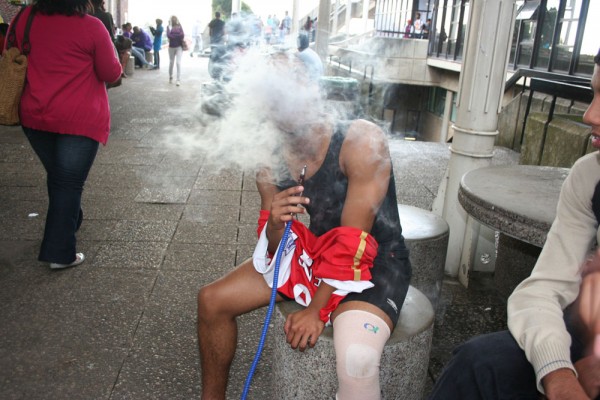 HUFFS AND PUFFS: Student goes out in a blaze of flavoured smoke

Herpes, heart disease and an early death are all but a puff of Hookah away according to the National Council Against Smoking (NCAS).

Wits University’s campuses have been plastered with posters warning students to stay away from hookahs  -also known as “hubbly bubbly”- dubbing them as “deadly”.  Non-government organisation NCAS began the campaign last year and has even used social media to reach students and spread the message against puffing on the flavoured tobacco water pipes.

Athlete Karlos Bryan said: “I play basketball and smoking hookah has no negative effect on my performance on the court.”

Another hookah smoker, 2nd year Bcom student Imron “Imo” Seedat, is part of a group of students who indulge themselves on the library lawns. When asked about the health concerns raised on the NCAS posters he said: “We don’t care! We are going to die anyway, so whether we go with good lungs or bad lungs doesn’t matter.”

According to a group of students, health concerns are not a worry because there are “pipe laws” by which all hookah smokers must abide. The three main laws are that:

“Whoever makes the hookah, is first to smoke;

Whoever lights the coal is second to smoke;

And, most important,  is that if you have sores on your lips, you don’t smoke.”

Head of campus Health and Wellness, Sister Yvonne Matimba, said if one of the smokers has herpes then all those smoking from the same pipe risk getting infected. The virus shows itself through sores on the mouth that look like cold sores, but the symptoms start long before the sore has developed. So, by the time other people notice their fellow smoker has a sore, they may have long been infected.

“The myth that hookah [smoking] is safer because it goes through a system of filtration has been scientifically disproved,” said Matimba