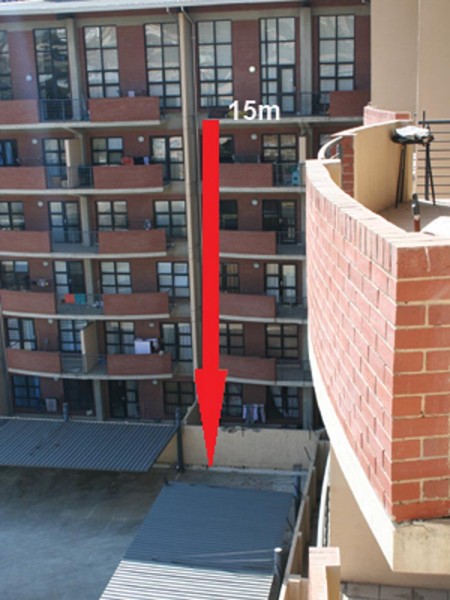 Students fell from the 6th floor- an estimated 15m- from a balcony in Milpark Mews.

The two males were students at AFDA, a film school in Johannesburg. One of the students, known as “Smurf” to his neighbours and classmates, died on the scene while the other survived.

Henrietta Drake, a 3rd year BSc student at Wits, said she heard people talking in the apartment above her. This was followed by a loud noise and the sound of someone falling.

“It sounded like they were just playing. I also heard a girl swearing at one of them but I don’t know why,” she said.

“They were quiet, then all of a sudden  I heard a rumble. It kind of sounded like they were wrestling and then something big fell down which caused a loud sound and a vibration to the building.”

Lulama Makhubu, a Wits 4th year mining engineering student and resident at Milpark Mews , said: “I was in the bathroom washing my face and we just heard a huge drop. It was explosive.

“My roommate and I ran out onto our balcony to check what had fallen. There were two people on the 1st floor balcony. One guy was still conscious and the other guy was just lying there not moving.”

“Paramedics arrived and rushed the guy who was conscious to hospital and some stayed behind trying to resuscitate Smurf through CPR, but he was gone.”

Drake’s roommate, Mapule Somo, said:  “[Everyone] is now scared of going on their balconies. The funny thing is that they are still going to party and go crazy on them [the balconies].”

Milpark Mews management representative, Shaun Germishuizen,  said the trustees had decided in a meeting on Tuesday that no comment would be given at this stage.

Smurf was buried last Sunday and his friend was discharged from hospital during the week.

“Wits University posted flyers offering counseling at the Careers and Counseling Development Unit (CCDU) to all those traumatised by the scene,” said Makhubu.