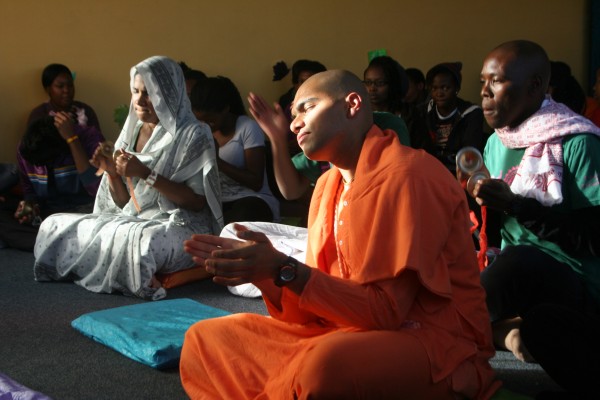 Ishvara Puri came to Wits as a regular middle class young man intending to get his BSc degree and then pursue a career in medicine. In his third year, however, he gave it all up to become a monk.

After training at a monastery in a remote village in the Indian state of West Bengal for a few months, he returned to Wits for his graduation ceremony in April 2009. He accepted his degree in macrobiology dressed in the saffron-coloured robes of a Hare Krishna monk.

“It was interesting to come back and see all my friends and my lecturers in this new look. It was something significant, a monk graduating. There was lots of attention on me.”

He welcomed the attention, because he wanted to make a point: “Spirituality should be the centre of our lives, especially as students.”

While he was in India, his Wits professors wrote to him, asking him to pursue an  honours degree because his undergraduate marks were good.

But Ishvara’s spirituality had started taking precedence over his academic goals since his first year. While he enjoyed the first-year anatomy and physiology classes he needed to get into medical school, he was reluctant to work with dead animals in lab experiments.

“I thought it wasn’t ethical for these creatures to be killed for my studies. I wasn’t comfortable with doing that, mainly for spiritual reasons.”

Ishvara Puri is satisfied with the path he has chosen and the contribution he has made to the lives of others through his work.

Ishvara Puri is helping a diverse group of Witsies to find spiritual enlightenment through the Bhakti Yoga Society, which he coordinates.