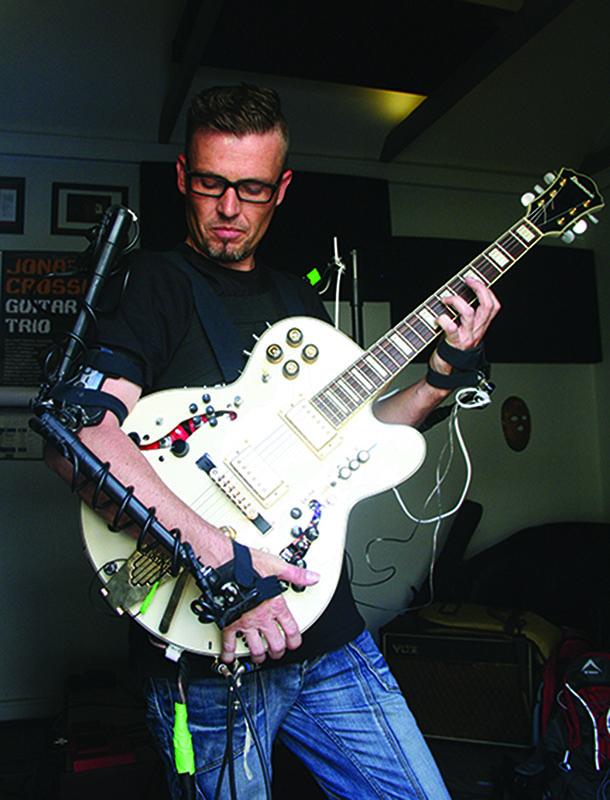 ROCKIN’ ROBOTS: Wearing a motion capture suit Jonathan Crossley is able to synhroniose the electronic with the acoustic sounds from his guitar. Photo: Emelia Motsai

WITS PHD student has created a robotic guitar that could end musicians’ dilemma- choosing between electronic and traditional musical instruments.
Jonathan Crossley, a music lecturer and PHD student at Wits, created the robotic device by combining an ordinary guitar with a motion capture suit similar to that used to create special effects in movies. But instead of generating images, the suit enables him to manipulate the sounds he makes while playing his guitar. This allows him to synchronise the electronic with the acoustic.

[pullquote align=”right”]The computer then creates a different sound from that motion, resulting in a unique effect for every motion[/pullquote]

“Then [with an old guitar] you could not change the sound in multiple ways while you were playing. The [robotic] guitar allows you to do that. You are still performing and improvising but you are enabling it through technology now,” said Crossley.
The suit maps out the different motions that the performers make while playing and sends them to a computer. The computer then creates a different sound from that motion, resulting in a unique effect for every motion.

More than a guitar
“The guitar itself has three outputs and 60 different controls built-in, a normal guitar only has one output and three controls. It has three digital delays, ring modular and mic input.”
According to Crossley, his invention was not unique. The real innovation was in how he is using it to extend the sound of the guitar.The robotic guitar is Crossley’s PHD thesis and he will be playing for his assessors in a show on February 22, at Wits. This will be the guitar’s first outing in South Africa and is open to the public.Crossley demonstrated his guitar for Wits Vuvuzela. The sound was…unique and little bit like random noise. However, Crossley said the music produced by the robotic guitar will make sense when performed with other musical instruments, as will be case in the February 22 show.

Mixing the old with the new

Crossley said it had taken four years from conceptualizing the idea to where it is right now. He bought the motion-capture suit from a company in the United Kingdom. He had initially wanted to build the suit himself but realized it would cost much less to buy it. Crossley has been playing guitar for 31 years and said that he made the robotic guitar because he wanted to combine the old with the new.

For more information on Crossley’s robotic guitar, including performances with this unique instrument, visit his website at www.jonathancrossley.co.za.