Splashing their way to the top

The Wits Men’s Water Polo club has climbed from league bottom dwellers only a few years ago to top of the log after winning the Gauteng 3rd Division Cup and finishing top of their league.

The team has seen dramatic improvement under new coach, Kelsey White, who took the reins in August last year.

Team captain Bjorn Eggers, 3rd year MBBCh, feels that there is “great commitment” from the players.

“[There] is no hierarchy in the team [and] all the guys are really humble. Everyone just keeps each other motivated,” he said.

“The coach has been fantastic.”

When asked about how he balances studying medicine with playing water polo, Eggers said it was all a matter of balance.

“[It’s] really difficult to balance study and play,” he said. However, “[sport] is so important for mental and physical well-being.”

Player Richard Fisher, 4th year BSc Mechanical Engineering, hopes that the club will go from strength-to-strength and get more exposure. “Water polo is a relatively small sport [but] there has recently been a lot more interest from matric-leaving students,” said Fisher.

Although one should be fairly fit to play, there are no prerequisites for Witsies wanting to join the club.

Fisher said that even knowing how to swim was not a prerequisite though it would “help”.

The team played their last match of the season on March 16 and ended it off with a super splash of success.

Playing against Pretoria Old Boys in the final of the Gauteng 3rd Division Cup, Wits managed to take the match after four chukkas of 12 minutes, eight goals to six.

Wits experienced a late challenge after halftime when Pretoria changed tactics and managed to score several quick goals early in the third chukka.

“We luckily managed to halt and keep them at bay for the rest of the game,” said Fisher.

Wits goalkeeper and vice captain, Murray Dryden, had a superb game managing to save two penalties and several one-on-ones.

The team aims to capitalise on their success when the new season starts again. 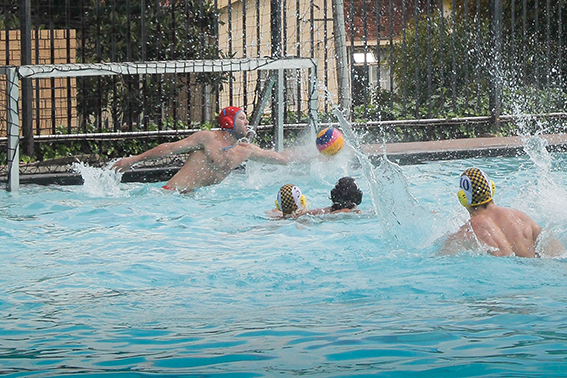 A (GOAL)DEN MOMENT: It was a nail-biting match for the water polo Witsies held at Jeppe Boys High on March 15. Photo: Tracey Ruff