High or low, there’s always a place to go

Many students who suffer from mental illnesses do not feel able to reach out for help because of the stigma attached to these health problems.

Wits Vuvuzela asked a number of Witsies for their feelings about mental health, in the light of the programme being run by Drama for Life (DFL) in conjunction with the CCDU. Their partnership, which has been running for five years, uses theatre as a tool for social engagement and justice.

This developed into the Human Rights and Social Justice Initiative for 2014, from March 17 to 21. This year, their focus is on mental health.

Most of the students approached agreed that it was difficult to talk about these issues. “I often keep things to myself and deal with things until I realise that I really can’t,” said Mukhodiwa Nwashe, 1st year Geology.

A fear of being judged was another reason for not discussing mental health, according to Vukosi Penyani, 1st year Occupational Therapy. “And if you talk, you think you’ll be a burden.”

The challenge of the DFL project lies in representing the inner workings of someone’s mind as an outward expression of mental illness. Drama for Life has tried to show how mental illness affects the relationships people forge with each other.

Ayanda Khala, co-curator of the initiative, said people could often not recognise when sadness was not just situational, but had become depression. Students did not have the language to communicate their feelings accurately.

A friend who said they were having a “depressing” day was usually not taken seriously. The comment was not responded to with urgency. She added that young people lacked the language to say “I am not okay”. They failed to understand the language of someone who genuinely cried out for help.

Khala said it was not until an individual felt completely overwhelmed that they began to reach out.

“We respond to mental illness not to mental wellness. Students need to be exposed to the knowledge that they have a right to a healthy mind. We need to develop tools of resilience and ask ‘How do I cope on my feet?’”

Mental wellness had everything to do with how people took care of their physical wellbeing as well, she said. The healthier a student was, the more capable they felt to face life’s challenges. “The ability to voice your frustrations to a friend about a test you failed is an undermined act of self-care.” 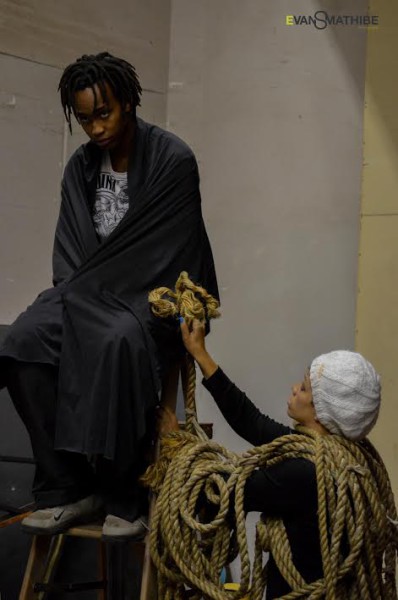 Lift me up : Concrete Metaphors a production by Themba Mkhoma Picture: Evans Mathibe

Refiloe Lepere, Co-curator of the Initiative and Director of Heading Out, one of the performances run during the week, said students carried guilty feelings associated with mental illness because it was associated with weakness and not strength.

“Many people who suffer from mental illnesses believe they are inherently wrong, or have done something wrong. That it should be somebody else, not me.”

Lepere cited the example of Thamsanqa Jantjie, the “fake sign interpreter” at Nelson Mandela’s memorial service last year. As a nation, we missed the opportunity to talk about mental illness when Jantjie was found to be suffering from schizophrenia.

Lepere said she hoped this campaign could open the channels of communication to allow students to have an honest dialogue about mental illness. One should be able to say: “I have a meeting with my demons” and not see raised eyebrows. It should be possible to react to mental illness in the way we would to catching the flu.

If the stigma of mental illness could be replaced with more validation given to each others’ internal struggles, more people would come forward for help, she said.