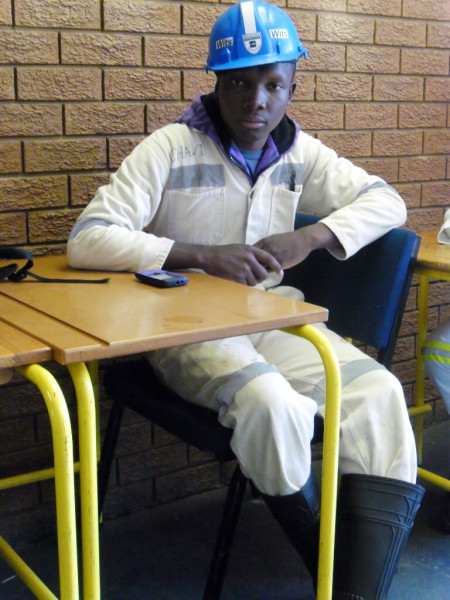 Nyiko Makhubela is determined to overcome his personal setbacks to achieve his dream of becoming a mining engineer. Photo: Provided.

Nyiko Makhubele grew up fending for himself in a rural village in Limpopo but finds himself at Wits University today, working towards his future as a mining engineer. Eric Mlambo, who helped fund Makhubela’s studies, tells his story.

It sounds like a far-fetched dream when 23-year-old Nyiko Sam Makhubele talks about his plans for the future. Makhubele, a BSc Engineering student, is determined to make his dream of becoming a mining engineer a reality despite the personal tragedies he has suffered in his young life.

It is the winter break for most university students and during this time Makhubela heads home, 550km away from Johannesburg, to the small village of Mphakane, 30km south of the city of Giyani in Limpopo.

Even trying to interview Makhubela for this article turns out to be a challenge as the village is not properly covered by telecommunications networks and the interview has to be conducted via Whats’app, a frustratingly slow and tedious affair.

Makhubela though, is not phased by these challenges and insteads focuses on the positives in his life. He attributes his success at Wits  to “hard work and determination.”

“I obtained 38 points and one distinction paving a way for me to be a Wits student,” he says. His matric results and admission to Wits were a dream come true for the young man who had close to nothing.

Before coming to Wits he lived in one-room house on his own. Makhubela’s mother died at a young age, leaving him and his siblings to fend for themselves.  His father remarried, moved away and never returned to the kids.

“With my good grade 12 results, I met Eric Mlambo who promised to cover my registration costs at Wits.” While his benefactor’s offer to pay his registration costs was a lifesaver, Makhubela soon realised the real challenge was yet to come during his first year at Wits. “I had both financial and exposure challenges. I didn’t have financial aid, a loan or bursary, and this made life to be miserable (sic) on campus.

“It’s stressful to be in the disadvantaged group financially, wanting to dress like ‘them’, not having easy access to money … those kind of things. The social life on campus is little bit higher for a small village guy like me,” he says.

After failing his first year at Wits, his confidence took a serious dent. But Makhubela was determined to make it, and he knocked on all sorts of doors in order to get re-admission and funding. With the help of a bursary from a mining company, he now lives on the university premises, and has made friends with his fellow students who provide some support to him.

He says this has helped him to adjust and acclimatise to the realities of varsity life.  “I meet people with different cultural backgrounds and different economic standards, it offers me an opportunity to appreciate our differences. But, the thing I must say is that the girls on campus are “wow!”.

Despite the distractions though, Makhubela has his sights firmly set on his dream: “I would like to work in Australia, they have the best mining engineers in the world, their mining operations are the safest as well,” he says.

“I wish to acquire skills and knowledge that I can use to get a good job with the big mines in South Africa. My goal is become an expert in the areas of mining safety,” Makhubela says.