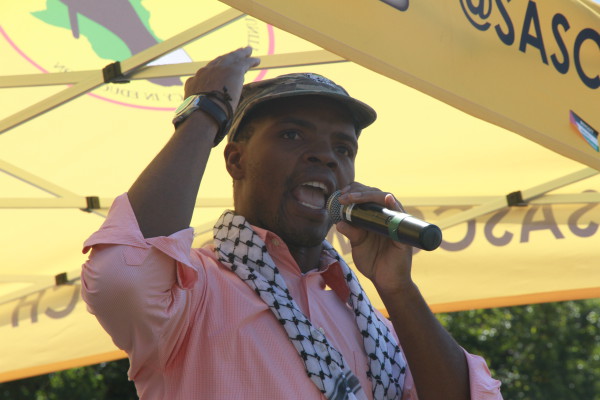 By Lutho Mtongana and Ilanit Chernick

Wits Student Representative Council (SRC) president Mcebo Dlamini has been suspended from his position, according to a leaked recording of an emergency meeting between the student leaders and Dean of Students Dr Pamela Dube.

In the recording obtained by Wits Vuvuzela, Dube told SRC members on Monday that a disciplinary hearing had  found Dlamini guilty of “assaulting” and insulting senior members of university staff via emails at the end of last year.

As a result, Dlamini has been suspended from his duties as SRC president but would be able to continue studying as a student.

“He is still allowed to carry on with his studies and is still a Wits student during this period,” Dube said in the meeting.

Dlamini was also given a suspended sentence of expulsion for one year, meaning that if he is found guilty of another offence in the next year he will be automatically expelled from the institution.

Dube told the SRC members that Dlamini would have 14 days to appeal the judgement.

was not able to get a response as of press time.

Initially, Dlamini had faced two charges of assault and insulting senior members of staff, the first incident taking place before he was elected SRC president. One of the university staff members was director of Residence Life Rob Sharman. The two charges were later combined into a single charge presented at the disciplinary hearing.

Dlamini had been given a punishment for the first charge of 25 hours of community service. Later, this was changed to the suspended sentence of expulsion.

“We wish it could be different, we wish they [charges] hadn’t happened … Mcebo knew this was coming”

Dube said that depending on the outcome of the appeal, the SRC would have to “sit down together and try and find a way forward”.

If the appeal “yielded negative outcomes” Dlamini would have to stand down as the SRC president for good. However, if Dlamini wins his appeal he can return to his position.

“We wish it could be different, we wish they [the charges] hadn’t happened … Mcebo knew this was coming,” Dube said in the recording.

However, Dube said the disciplinary process had to unfold despite Dlamini’s status as SRC president: “We don’t just ignore this because someone is a CEO or the SRC president.”

Both Dlamini and Kalla were not available for comment.

Wits Vuvuzela has previously reported that on Feb 28 Dlamini apparently made two Facebook posts announcing his resignation. In one of the posts he said that vice chancellor Prof Adam Habib had used the “racist zionist controlled” Wits Legal Office to find him guilty of misconduct and sentenced him one year of expulsion from the university.