Not all students at Wits can afford menstrual pads.

Wits Citizenship Community Outreach (WCCO), representative Thando Ntambo, has told Wits Vuvuzela that some students “use sponge during their menstrual periods” just to make sure they come to school.

WCCO run a food bank and they have identified that there is a need to begin a toiletry bank at Wits to help students who require the assistance.

According Ntambo, the demand for a toiletry bank has become “a big issue”.

“some students use sponge during their menstrual periods”

According to Chonde Chipulu the chairperson of ACTS, the idea to create a toiletry bank is to “empower female students,” but they also needed a way to make donating fun which is why they thought of Zumba. 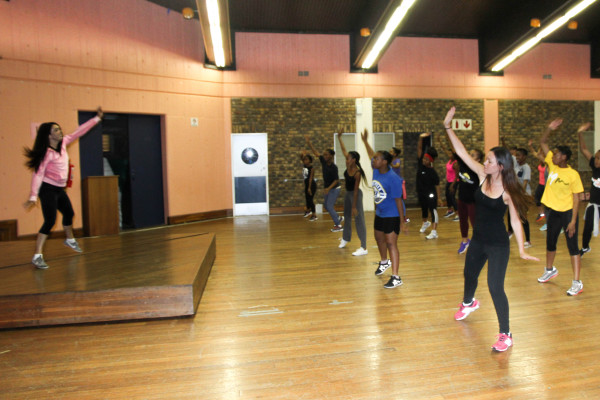 ZUMBA FOR CHARITY: Over 50 students attended what was a charity Zumba class, to help establish a toiletry bank. Photo: Anelisa Tuswa

“No student had to miss class because it’s that time of the month” said Chipulu.

Lebogang Molefe, an Honours student in International Relations described the initiative to create a toiletry bank as a way to restore another student’s “dignity”.

“But, it’s just great that you can do both fitness and a charitable cause at the same time,” said Molefe.

Jordin Borer, attended the Zumba class with his 75 year old grandmother and younger sister to support and show respect for women.

“In conditions like these, it is important to show solidarity and support women where we can,” said Borer.

According to Borer, his grandmother has been a great role model for him, which is why he supports all “women and women organizations”.

The professional Zumba instructor Ayala Raichlin, volunteered to give Zumba lessons on Monday in order to make to help with the establishment of a toiletry bank.

“When you do a collection along with a fun event, there’s a lot of energy and emotions” she said “as opposed to just dropping something, somewhere there’s lot of emotions involved.”

About 55 students came to support the initiative. Many gave paid R15 to get into the Zumba class but also donated sanitary pads, toothpaste, shampoo and deodorant.

According to Ilana Demby, SAUJS’ National Women’s officer the event raised over R800 which is all going to WCCO to contribute to their newly established