Students from the Palestine Solidarity Committee were threatened by management to be taken to council if they did not remove their Palestine exhibit. 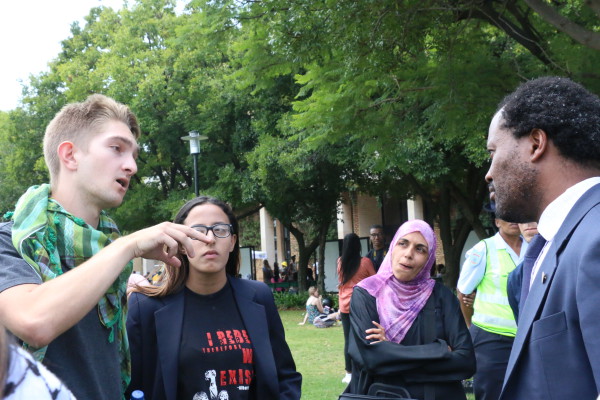 Students and members of the Palestine Solidarity Committee (PSC) and Deputy Vice Chancellor Prof Zeblon Vilakazi discussing the removal of the Palestine exhibit on the library lawns on Tuesday. Photo:Yeshiel Panchia

The Palestine Solidarity Committee (PSC) has refused to remove an exhibit from the Library Lawns despite being threatened by management who claim the exhibit was set up under “false pretences”.

After a closed meeting with members of the Wits executive staff and members of the PSC, the organisers of the event were given the choice to remove the exhibit about the Israel-Palestine conflict until next week’s scheduled #IsraelApartheidWeek events or remain on the Library Lawns and be taken to the University Council, according to PSC member Azra Karim.

“There was a threat given to bring the organisation of the PSC to council,” Hassan said.

It was decided by the organisers of the event that they will continue with their exhibit despite management’s threat. “We have never come this far with management … We are going to stay … We will deal with any repercussions,” said Karim a member of the Wits PSC.

This comes after the university attempted to shut it down the exhibit on Tuesday and threatened to have security remove it. “The space was booked for the Orienteering Club under false pretences. It is now being used to promote #IsraelApartheidWeek,” the university said in a statement at the time.

But according to the organisers of the event all procedures were properly followed and the event was approved by university management. “Even Habib couldn’t argue that all the procedures weren’t followed,” said Hassan.

Organisers of the event feel that management is treating them differently due to the controversial content of the exhibition. “If it was about Darfur or bringing back the Nigerian girls there wouldn’t be a problem,” said Hassan.

In the meeting Habib was concerned over creating a hostile situation, according to Karim. “They were also told that anything involving Palestine or Israel needs to go through him,” said Karim.

PSC believe that when they share the space next week with the space with South African Union of Jewish Students (SAUJS) next week, which is the plan, the situation will likely be more hostile.

The university in its statement also accused students of being in violation of a court interdict. “The students broke the university’s rules and their behaviour is irresponsible, duplicitous and could put our campus at risk.”

However Wits PSC disagrees and says they were not involved in any protest action. “We didn’t break any court interdict if we did, we would have been arrested … It’s the most ridiculous thing,” said Karim.

“It highlights the double standards of management, the use of scare tactics and intimidation,” said Hassan.