Wits student Zareef Minty is the winner of national competition One Day Leader. He will soon begin an internship at the presidency.

By Nozipho Mpanza and Tendani Mulaudzi

Minty was announced as the winner in a grand finale that aired on May 9. He will soon begin his internship at the presidency where he will develop programmes aimed at empowering the youth.

“I was shocked,” he said reflecting on the moment that he was officially announced as the winner of the season.

Minty has watched the competition “religiously” since its third season and has had his heart set on the title for the past year. He is excited to use the opportunity presented by the competition to expand his horizons.  “It means everything to me, it gives me the opportunity to continue the work I was doing on a much larger scale,” said a joyful Minty on the sentiments of his new title. 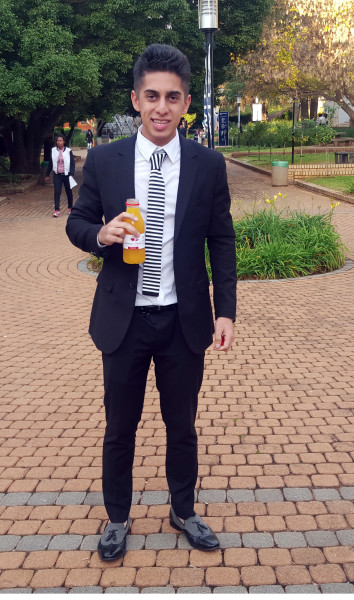 The victory did not come without its own set of challenges. He had to be disciplined about dividing his hours fairly between the competition and his law degree. According to Minty, the debating was the most the most challenging part of the competition. “I think every single one of us felt the debates,” he said.

Contestants on One Day Leader undertake various activities including debates and social engagement projects to compete for the title as South Africa’s leading emerging leader and an internship at the presidency.

“I didn’t deserve the title more than anybody else on the show but I seriously wanted it more.”

It’s no surprise that there were times when the contestants had conflicting views on roles and power as the personalities of the six strong willed individuals would clash. The competitors were often disciplined by their mutual respect during times of conflict.

Minty is ready to hit the ground running during his internship at the presidency, “Immediately after I won while I was standing next to the NYDA CEO, I was already thinking of programmes I want to run.”

Minty maintains that his primary goal is to build three schools by the end of 2017 to realise his dream of an educated and conscious South African youth.