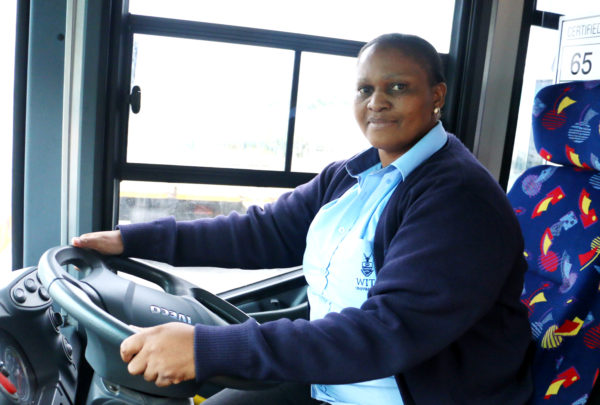 In November last year Rebecca Phutsi Makgabo became the first, and so far the only, woman driver to be hired by the department.

“Should there be more bus driver vacancies, the principles in line with the employment equity plan will be applied,” Mudau said.

Makgabo, 43, is a mother of three who is temporarily working part-time.

“Working in a men’s industry is not an easy job,” said Makgabo. “I feel so humbled because Wits had faith in me. . . The environment is so good.”

Her family’s only complaint is that she always leaves home early in the morning. This is because she uses public transport from Kliptown, Soweto to get to Wits.

Wits bus marshal Frans Moriana said: “What the services department is doing in terms of transformation is good. It shows that we are heading in the right direction. I hope in the future there will be a balance between male and female.”

“I like that she expresses herself and knows her rights,” he said. “She is a humble person.”

Makgabo, who previously worked with South Africa’s oldest and largest bus company, Putco, said she had not known there were still youths who were respectful.

“Students from Wits have respect; they are so humble compared to where I come from,” she told Wits Vuvuzela.

Her wish is to grow at Wits and further on do a risk management course.