Having to reckon with the levels and layers of violence in a society yet to heal makes me wonder who the real enemies are.

Part of capturing the zeitgeist and telling the stories that need to be told is unravelling the wounds of a society fundamentally fractured by its past. As journalists, we are meant to solely be observers but the world we occupy is incredibly loud and extremely close, so uncomfortable that we have no choice but to confront the unimaginable.

South Africans live in perpetual post-traumatic stress syndrome in ways we cannot even begin to articulate. Journalism becomes difficult when we are not given the space to wrestle with the ugly, instead we are intimidated to accept the status quo. During the raids of shops owned by foreign people in Johannesburg CBD in the last week, we faced the cruelty of a society unable to 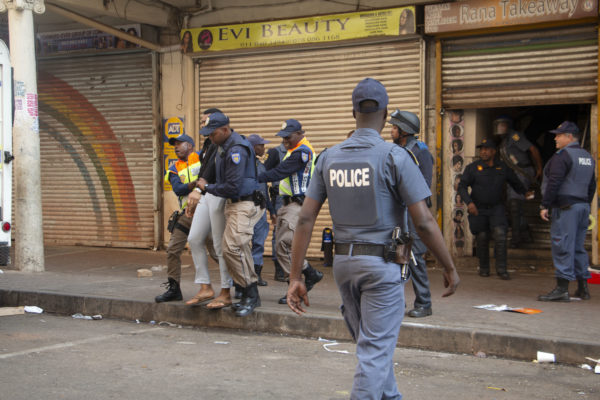 empathise because what we know more than we know our own skin is violence.

The lines between policing and spectacle, mob vigilantism and blind hate became so blurred in the throes of chaos on Bree Street this afternoon that articulating where this trauma even came from, where it started and why it matters becomes too overwhelming to measure in words.

Our police force is just that – a force. It should be a service, a means of protecting and facilitating the safety of communities but our deep mistrust of policing and public control is loaded with history. The South African Police Service (SAPS) threw people from their businesses and homes like rag dolls, under the thinly veiled guise of a ‘raid’ for illegal substances and paraphernalia.

As observers it seemed to be more about a witch-hunt, the gathering of people who we think are not like us and assaulting them for it. The SAPS with their armour and their teargas revelled in holding power so absolute in that context that they seemed to get a kick out of the performance, like they find pleasure in inflicting pain.

We are conditioned to feel good about forming community around the common enemy, but as hundreds of people waited to rip others apart, I wondered who the common enemy really is?

Crowds of people gathered around barricaded tape, flooding the streets with makeshift weapons, quite literally thirsty for retribution in the form of blood as they struggled to lynch their prey. As a journalist bearing witness, I attempted to document this surreal moment of heightened violence, the hate so palpable it made me shiver, but even then I was reminded that in my role as observer, I am resented as someone who does not have a right to record their pain. Maybe I don’t. But the amount of times I was threatened for wielding both my pen and camera are too many to count, by both police and public. It is also symptomatic of a cultural climate where it is easier to call fake news and cabal conspiracy on journalists than it is to confront truths we struggle to grapple with.

This truth is that we, as South Africans, are wilfully and deliberately Afrophobic. I use Afrophobia because the type of pervasive violence towards refugees, immigrants and foreign nationals who seek safety in our democracy is always aimed at Africans and never directed at the Western gentrifiers that hold the wealth. It is a truth we are struggling to confront as we continue to rally against entire communities just trying to exist. 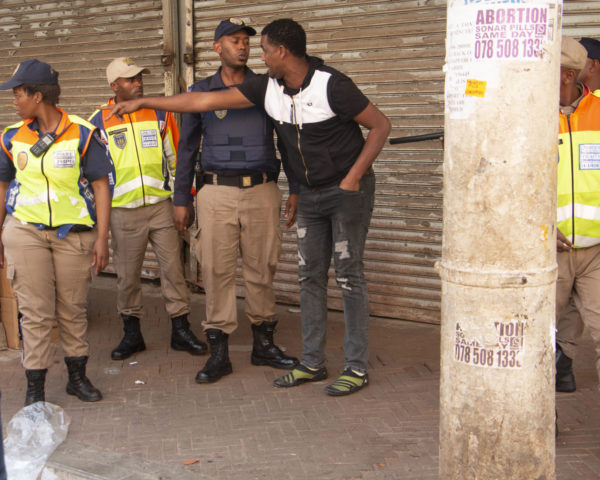 A foreign store owner points out where he lost his phone after a scuffle with people in a nearby crowd. Photo: Busang Senne

During the Johannesburg raids, I came to understand our society as an onion, layered and nuanced to the point where the violence on the ground wasn’t the only violence taking place. As a black woman, my body is a site of violence, nothing but warm flesh for the taking. I am reminded of this when police officers, people meant to uphold justice and protect, are the same ones harassing and sexualising me.

These acts of violence, both seen and unseen, are a part of our collective memory, our shared story, and although we want to tell different stories, trauma, until we find a way to collectively heal, takes centre stage in how we fundamentally relate to one another.

I think we are so damaged it is all too easy to damage others. But when will we stop seeing the enemy everywhere else but in ourselves?