A student team will be sailing to Rio de Janeiro in January 2020 after partnering with JM Busha Investment Group on August 20, 2019 for the Cape to Rio ocean race.

The sailing team is made up of four students from Wits and two from the University of Pretoria (Tuks). They are Ryan Robinson, Emma Clark, Tawanda Chikasha and Hearn Johnson (Wits) and Michaela Robinson and Jonathan Ham (Tuks).

The Cape to Rio is a 50-year-old race beginning in Cape Town, where sailors embark on a journey across the South Atlantic Ocean to Rio de Janeiro, where the race is concluded.

“The Cape to Rio is an ocean race, so you are at the mercy of Mother Nature,” said 22-year-old team member Ryan Robinson, who has done the race with his parents and sister, Michaela, three times before.

Now that they have a sponsor for the race, the team will no longer go by the name of ‘Ciao Bella Sailing’, but rather ‘JM Busha 54’

JM Busha Investment Group is a solution-driven social enterprise that gives financial advice to companies. As ambassadors of the brand, each of the sailors had to sign a peace pledge in favour of peace, harmony and unity.  Their aim is to promote peace among the 54 countries of Africa, hence the team name.

Ryan Robinson told Wits Vuvuzela that JM Busha 54 hope to complete their journey within 21 days and win it. 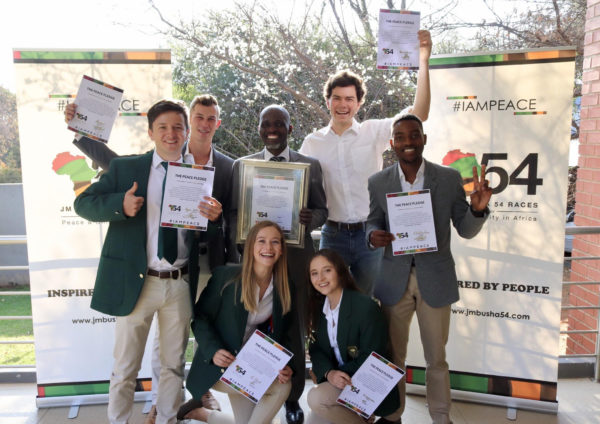 Chikasha, 23, said, “It means a great deal for us to have a sponsor. Most people, especially student teams, don’t get sponsors until the last minute. Aligning with such a great initiative is really amazing.”

Teammate Emma Clark, also 23, said, “It all just started as a discussion on the library lawns, although Tawanda has really been our driving force.”

Business owner and CEO of the investment group, Joseph Busha, told Wits Vuvuzela that selecting this team “was a no brainer” because he liked the fact that the team was so committed and had both men and women sailors.

“That’s what we really want to promote, social cohesion between the genders,” added the businessman.

At the thought of spending such an extended time in a confined space, Chikasha said, “I think the day-to-day dealing with people will be the biggest challenge for all of us. For example, there is no door on the bathroom, so it’s just little things that you don’t think about when you’re alone.”

But the third-year Wits economics student is also most excited to finally arrive in Rio because he has not been to South America before.

After the race has concluded, the team will be flying home to ensure that they arrive in time for the academic year to begin.

The team is set to sail in the first week of January next year.