Based on the book, From Shantytown to Forest: the story of Norman Duka, the play addresses the passing of the baton to address the social issues to the current generation.

Hamba kahle, mkhonto, Wits Theatre’s latest production, premiered to a cosy audience of about 80 in the 360-seat capacity theatre on Tuesday, September 17.

The play draws parallels between past struggles and those prevalent today. It is centred on Thoko, a young woman who does not understand the issues of today and so decides to go back to the past to learn her history.

Through this journey she narrates the story of two young comrades, Norman Duka and Bongani Mkhize, who joined the ANC’s military wing, Umkhonto weSizwe (MK), after its formation in 1961. The men were among the youngest recruits to go to the training camp in Angola.

The play highlights the role of young people in all of South Africa’s revolutions. It begins with the 1956 treason trial, and includes Steve Biko and the black consciousness movement and the 1976 Soweto uprisings.

After the intermission the play’s timeline arrives at the present and shows youth activism in #RhodesMustFall, #FeesMustFall, #EndOutsourcing and the most recent social media-spurred movement, #EndGenderBasedViolence.

The all-woman cast was a deliberate decision taken after no men auditioned for the play, according to director Robert Mshengu Kavanagh.

“After the turn out at the audition we did not want to scrap the play. I initially wanted a black, white, male and female cast, but men and white people not showing up is a political statement on its own,” he said.

Kavanagh said that the play is important because the history of the struggle in South Africa is always propelled by the youth.

“A lot of things happened to them that are happening to you guys. The voices of the past showed you what kind of South Africa it wants and Thoko’s character tells us to listen to the past and do something about our present,” Kavanagh told Wits Vuvuzela. 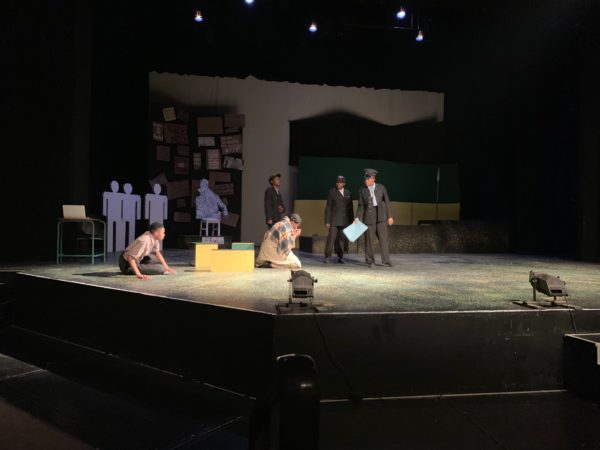 “Struggle stalwarts took action to get the country to where it is now. This play is about passing on the baton to this generation to take action and take it upon themselves to make a change. What are you guys doing? That is the open question,” the director said.

Onalenna Sellwane, a second-year BA dramatic art student who plays Thoko, said the play was a learning experience for her because she did not know about her history.

“During the research phase of the play we learned a lot about the struggles of the past and I realised that as young people we live in a disconnected reality. Parallels can be drawn between issues of the past and those of today like inadequate education and gender-based violence,” said the lead actress.

First-year actress, Zenaye Skosana, said after the premier, “I think this just shows how much our education lacks and how much the textbook leaves out. I hope people took away the message and learn something from this play.”

“I like that it was an all-female, women of colour cast and this is because women of colour often experience all injustices in society. Having an all women cast was a political statement and that is the one thing I appreciated,” said the second-year BSc computer science student.

FEATURED IMAGE: MK troops against the background of an ANC flag, a statue of Cecil John Rhodes and the black power salute.     Photo: Anathi Madubela