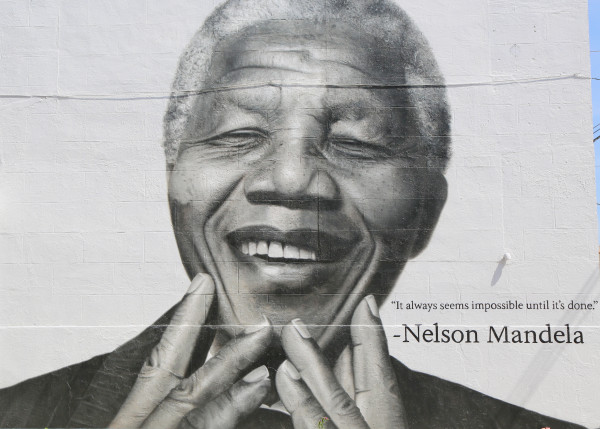 Nelson Mandela International Day, also known as Mandela Day, is a global event that occurs on July 18 each year in celebration of the late South African president Nelson Mandela’s birthday and his achievements END_OF_DOCUMENT_TOKEN_TO_BE_REPLACED

Opinions: Mandela’s virtues are our virtues

This Mandela Day will certainly be regarded as the most significant so far – but why do we need a Mandela Day at all?

On July 18, 2009, Mandela’s birthday, Mandela Day was declared an international day for peace and to celebrate his legacy. People pledge to give 67 minutes of their day to do good, a minute for each year Mandela gave to fight against the oppressive apartheid regime.

On the website, the reason for Mandela Day is given as: “To inspire individuals to take action to help change the world for the better, and in doing so build a global movement for good.”

But it is this concept of doing 67 minutes of good that interests me most. Why do we need a specific day, time or place to do something good?

In doing 67 minutes of good on Mandela Day, people are joining together in an initiative they feel is worth being part of – clearly, or no-one would bother.  A whole year has passed since the last, but people sit and wait for someone to tell them that this is the day they should start feeling charitable.

This is an example of how humans cross the species border and become sheep. It all stems from our need to be guided, to follow, in an attempt to be normal.

In Tribes, Seth Godin writes about humanity’s need to belong. He says all people want to be part of a tribe, a connection of people who are like-minded and share common beliefs. No matter how big or small, people need to be connected to a leader or an idea.

People look to leaders who have similar perspectives to their own. Everything that has been accomplished over time, including overcoming apartheid, was achieved by the actions of leaders. These leaders are people who take the initiative to vocalise their beliefs and make a change in one way or another.

We follow them because we see ourselves within these leaders. We share their innate morals and cultural outlook. A leader holds a mirror to our subconscious and helps us put into motion what we already knew we wanted to achieve.

Why is it, though, that all credit goes to that particular leader? Why do we attribute all the accomplishments achieved on behalf of our country to one man? Is it up to Mandela to hold us together? Or can we learn from him in the attempt to continue his leadership tasks, working consistently together to keep South Africa on the right path?

With all the greatness the country has achieved, South Africans should look to themselves and their own leadership qualities. If we didn’t share Mandela’s need for change, his forgiveness, his drive and heart, he would never have been able to achieve what he did.

It is now time to take our own virtues into consideration. We need to recognise our inner power and learn to do something with it.

The truth is, South Africa got where it is because we all have the ability to do good. We followed Mandela because we have his qualities and he shares ours.

With Mandela Day approaching, people are suddenly browsing the web for some charity or event to participate in for 67 minutes, do some good and just to be involved. But surely all this does is make us feel complacent; that we’ve done our bit for the year.

Is it not time that we as humans see ourselves as captains of our own ships, makers of our own destinies? The beauty of life is that we are all given choices, and it is up to us to be active in the choices we make.

Give yourself some credit as a South African, and realise that you don’t need a “Day” or a leader to show you the way or to make a change. We all have the ability to be the leaders that the rest of the world needs.

Instead of sitting around and waiting for Mandela Day, do what Seth Godin tells us: “Shine a light, build a tribe and make a difference” today.