A new online applications system has been introduced in 2017 but applicants can still apply using paper applications.

END_OF_DOCUMENT_TOKEN_TO_BE_REPLACED

The faculty of health sciences at Wits University has released a statement outlining a revised admissions policy which will take effect from 2015.

It is not clear whether the new policy will affect students who have already submitted their applications to study next year.

Previously, only 25% of top performing candidates were accepted and this has been increased to 40%. The remaining 60% of places will be allocated to different categories of previously disadvantaged students.

Read the full statement below:

REVISED HEALTH SCIENCES ADMISSIONS POLICY
Wits University has revised its admissions policy for all programmes offered by the Faculty of Health Sciences. This follows the recommendations of a task team commissioned by the Vice-Chancellor.

Applicants who are currently applying for entrance in 2015 will not be required to complete a Biographical Questionnaire (BQ). Their matric results will carry a 50% weighting and the results of their National Benchmark Tests (NBTs) will make up the other 50%. This weighting may change for 2016 entry with the introduction of an online BQ.

The new admissions policy is based on recommendations by a Wits University task team, consisting of members of the Faculty of Health Sciences, the Student Representative Council, other Faculties and the Senior Executive Team, that was commissioned to review the admissions policy for the MBBCh, or medicine, degree. The activities of the task team included a public meeting that was held in April 2014 to discuss the current and future admissions criteria and policies for entry into the degree. Wits University is committed to being a demographically diverse and cosmopolitan world class institution furthering the Constitutional vision of a democratic and non-racial South Africa. We will continue to research and review admissions policies in line with the realisation of this goal.

The university is considering changing the admission criteria for medicine by doubling the percentage accepted on achievement alone, regardless of race.

Currently, 25% of top achievers are accepted regardless of race but recommendations would see that doubled. The remainder is presently allocated in favour of redressing racial disparities.

This is just one of a number of big changes presented at a public meeting to discuss the current and future admissions criteria to medicine on Tuesday night. The other two big changes are that 20% of places would be assigned to students who come from rural environments and applicants with undergraduate degrees would be considered equally regardless of what they previously graduated in.

“What am I doing here, then? I’ve wasted two years of my life,” one student complained. She is currently doing her undergraduate in health sciences. Many of the students there felt they had been encouraged to do these types of degrees in the hope that they would get preference to be accepted to medicine and were now being told this might change.

“A bachelor in health sciences is not a pre-med degree,” Vice Chancellor Prof Adam Habib said.

According to the university, about 8 000 people apply for the degree each year but only 230 receive firm offers, the majority coming from urban environments and middle class families. This excludes many applicants from rural areas, previously disadvantaged backgrounds and poor schools.

Habib said they are trying to maximise the production of doctors but are limited by infrastructure and resources. He advised that students apply for alternative degrees as “some very good people will not get placed”.

The task team is deciding if they will be able to implement the recommended criteria next year or wait until 2016. They will release their findings in a report at the end of this month. 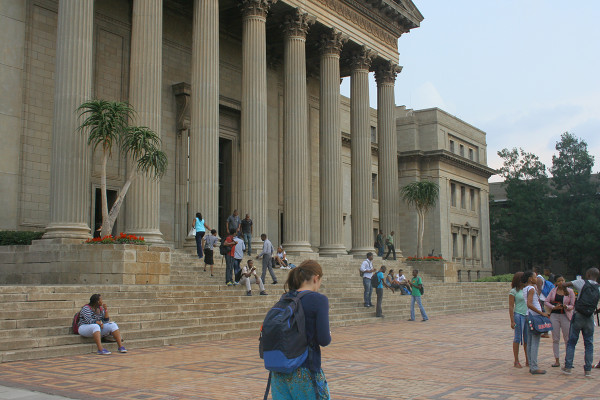 Vice Chancellor Prof Adam Habib said: “It’s a sign of the desire to get into Wits. There isn’t another university that has as many applications as per the places that are available.”

“In medicine, by the way, the situation is even worse. We have 250 places, which is the largest medical program in the country, and we get 8 000 applications,” he said.

Wits  has a rich history that goes back over 90 years and is strategically placed in one of the largest cities in Africa. Habib said these were factors new students take into consideration when they apply.

[pullquote]”In medicine, by the way, the situation is even worse. We have 250 places, which is the largest medical program in the country, and we get 8 000 applications.”[/pullquote]