The struggle veteran’s 93rd birthday sees the opening of an exhibition, chronicling both his his life and legacy.

Dozens gathered at the Constitution Hill in Braamfontein on Sunday, August 21, 2022 to honour anti-apartheid activist Ahmed Kathrada with a special collection of personal artefacts and imagery.

The Ahmed Kathrada foundation hosted esteemed guests at the Old Fort section of the historical monument in celebration of the life lived by “Kathy” or “Uncle Kathy”, as he was fondly known. Among attendees were Kathrada’s wife, Barbara Hogan.

Speaking to Wits Vuvuzela at the exhibition entrance, the Kathrada Foundation’s director, Neeshan Balton said: “[The exhibition] hopes to tell the story of the liberation struggle… it also hopes to get people to experience what living in prison on Robben Island would’ve been like.” He added that the exhibition shows that “freedom and any struggle to be achieved can’t be work overnight, it requires work over generations”.

“Seeing this exhibition in his honour not only gives the family hope but the world hope that his fight for freedom and non-racialism will continue,” said Yusuf Areignton-Kathrada.

From his favourite brown checkered blazer and black slip-ons to a addressed letter to former president Jacob Zuma, and a replica of his prison cell – the exhibition shows the highs and lows of Kathrada’s life.

Kathrada had served as a parliamentary counsellor to the late Nelson Mandela during his presidential tenure before his passing in 2017. The two had been in prison together at Robben Island before Kathrada was transferred to Pollsmoor prison from which he was released in 1990.

Reflecting on Kathrada’s life, speakers went as far as when he was 17 years old starting out as an activist against the Asiatic Land Tenure and Indian Representation Act. Despite having held many leadership positions by the end of his tertiary life, “he knew that the struggle had not ended,” said Irfaan Mangera, one of the foundation’s activists. Mangera remembered Kathrada as an outspoken activist who was respected regardless of his young age among his fellow activists.

The South African Revenue Services commissioner, Edward Kieswetter reminisced on the day Kathrada died as he stood beside him in hospital. Kieswetter said, in his last days, Kathrada’s fight had lost spirit as the new generation leaders “were failing to honour the promise of our constitution, to heal the wounds of the past and to establish a democratic society”.

The permanent exhibition will be accessible to the public during normal trading hours.

FEATURED IMAGE: An attendant of the exhibition glaring at the wall detailing the struggle veteran’s last years’ on earth. Photo: Keamogetswe Matlala 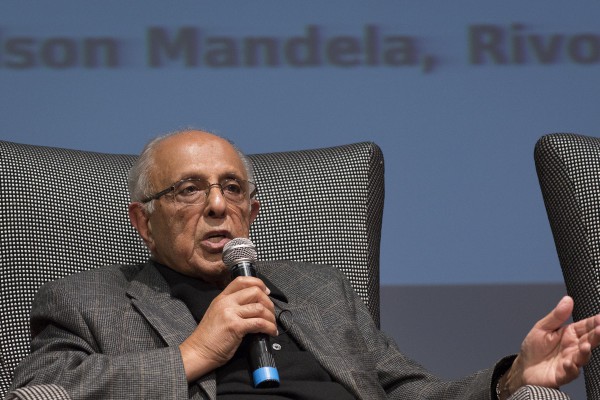 Ahmed Kathrada and Achille Mbembe will be in coversation on “A History of Non-Racialism in South Africa.”

This event launches the 2014 Johannesburg Workshop in Theory and Criticism (JWTC). The theme of this year’s JWTC is Archives of the Non-Racial. A mobile workshop, it will travel from Johannesburg to Mbabane in Swaziland, Durban, Ginsberg in the Eastern Cape, and Cape Town. For the full programme, see here.

ALL PUBLIC EVENTS ARE FREE AND OPEN TO ALL

Contact Najibha.Deshmukh@wits.ac.za to reserve a seat.This will not, however, guarantee a seat. Seating will be allocated on a first come, first serve basis.