Review: The Sound Of Silence at WAM 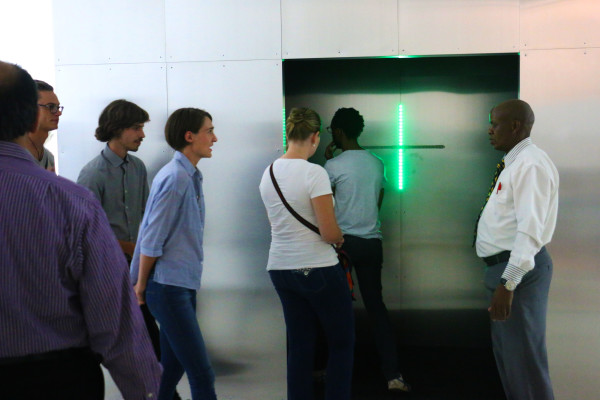 The second civil war in Sudan was from 1983 to 2005. Twenty-two years characterised by famine, disease and death. And as with any war situation, journalists and photographers were there, documenting the horrors of the war.

One of these photojournalists, Kevin Carter, became world famous after taking the iconic picture of a crouching baby girl being stalked by a vulture at a refugee camp.

Carter, who was part of the prominent Bang-bang club (a group of four white-male photographers who became known for taking pictures of apartheid violence in the late 80’s) and who won a Pulitzer Prize for the image, is said to have taken 20 minutes to take the picture. The question then has always been, why did Carter not go and help the little girl? A girl whose name, face and identity has now disappeared into the blank spaces of history where the most vulnerable (black bodies mostly) disappear into nothingness.

Bringing this picture taken in 1993 back into the spotlight is Chilean-born, New York-based artist, filmmaker and architect Alfredo Jaar. Showing at the Wits Art Museum, the installation work, called The Sound Of Silence, consists of a very large aluminium structure in the middle of the museum. On the side facing the entrance of the museum, the structure has large horizontal white lights. At the back of the box is an entrance to a pitch black cinema where a large black screen shows words written in white.

Kevin. Carter. Kevin Carter. The words read, going on to tell the story of the troubled photojournalist. In the silence and darkness of the room, one is absorbed into the screen. Towards the end of the display, four mounted cameras flash brightly to blind the audience, only to slowly reveal the picture in discussion.

Once the picture is revealed the words go on to examine the corporate ownership of such images and how such images are made to feed into capitalist consumption based on who owns them.

Following Jaar’s oeuvre, this installation challenges viewers to examine the problematic ways in which consumers and image makers partake in a process of giving or taking away power. Jaar indirectly asks, what is the responsibility of image makers (photographers, photojournalists)? And what is the responsibility of consumers and viewers? The ethical implications of capturing, owning and distributing such politically charged images are deeply questioned.

The Sound of Silence is showing at the Wits Art Museum from 23 February to Sunday 10 April 2016.