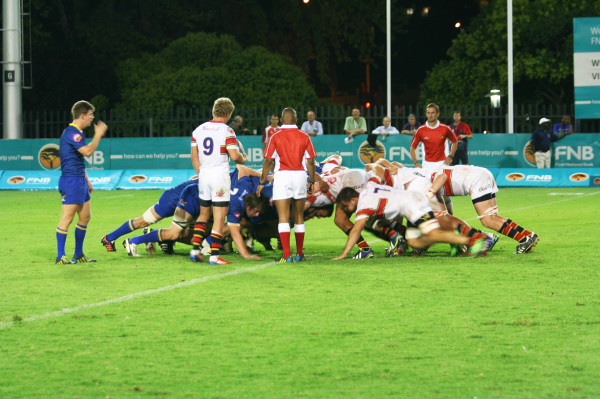 SCRUMMAGE: Tuks trashed Wits 53-8 at their Varsity Cup match on Monday. This is the second loss for the team this season. Photo: Caro Malherbe

The manager of the Wits rugby club, Andy Royle, is worried about the lack of experienced players in the team and is concerned it will throw them off for this year’s Varsity Cup.

The drop in experienced students came as a surprise after eight failed to qualify academically, said sports officer Yvonne Swanepoel.

As per a Wits ruling, out of these eight, only three can be chosen to play as non students for the University, making the picking box only 25 players full, with 13 of these playing for the first time for Varsity Cup.

“In the beginning of the year we were quite healthy but then when a further two didn’t make it we were completely thrown off in preparation for the season,” said Royle.

In terms of experience and combinations, the squad is lacking in preparation and “can’t go out on the field and expect to get great results”, said Royle.

“We try to keep a balance where we have either two in the back and one in the front or the other way round, but the inexperience in the team has definitely thrown us out.”

Tuks thrashed Wits on Monday night 53-8. Royle said “the guys know what needs to be done and how they can improve and will keep fighting in every match of the season”.

Although the team has not been practising together for long, Royle feels it is still better than last year’s team and can only improve from here on.

The academic requirement for rugby players stands at a total of 48 academic points.  Any less than this does not necessarily go against Varsity Cup rules but Wits would not let them play.

Wits allocate points to all subjects. Dependent on the marks received, a certain amount of points will be given. For example: the subject Marketing may allocate X number of points for a student who got an A symbol, then X number for a B symbol and so on, according to Estelle Nobin, deputy registrar from the School of Commerce, Law and Management.