The bitter, yeasty smell of fermenting beer flows out the door as you enter the brewery located in an office park in Kyalami, and the smell is surprisingly appealing. The brewery bar is simple and welcoming with light streaming through the doors making the polished silver beer taps shine. Brewmaster Apiwe Nxusani is out of sight working in the brewery. As a black female brewmaster, Nxusani is a rarity in the brewing industry.

The title, ‘brewmaster’, is given to people who have at least five years of practical brewing experience. As brewmaster, Nxusani oversees the brewing process, recipe design and quality of the beer being made at the brewery. 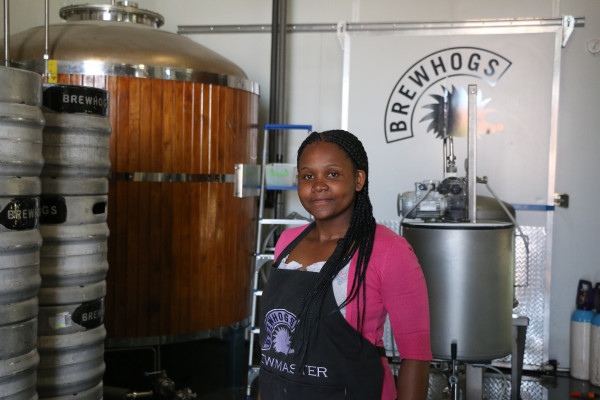 MASTER: Female beer brewers are rare these days but Apiwe Nxusani is a master beer brewer who has her honours in Microbiology. She hope to inspire more black women to enter the male dominated industy. Photo: Samantha Camara

“My favourite thing is seeing people interact with the beers I have made, knowing that I started them from scratch,” says Nxusani.

Nxusani is currently the brewmaster and part-owner of micro-brewery Brewhogs. She began her career climbing the ranks at South African Breweries (SAB) in 2007, leaving in 2013 to pursue a path in craft beer.

According to Nxusani, women have been the ones who brewed beer throughout history and traditionally in many African cultures men are not allowed to do be brewers. However, in modern culture being a brewer is predominantly a male job.

“A lot of people that come through are actually surprised that you have a black woman actually making the beer, which is something that is uncommon currently,” Nxusani said.

Nxusani said she became interested in brewing while in high school when she attended an open day at RAU (now University of Johannesburg). She completed her BSc (Microbiology) at Wits and went on to do her Honours degree at the University of Pretoria. 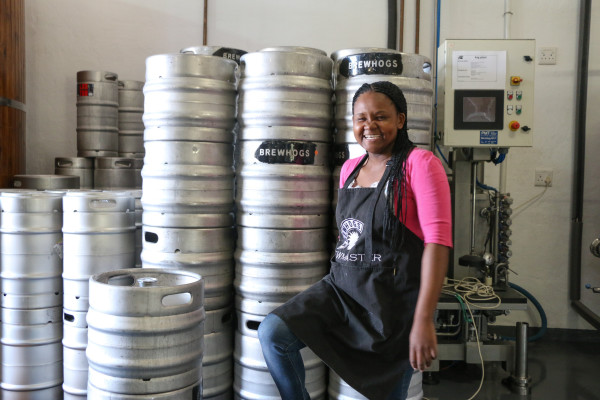 CRAFT BEER QUEEN: Apiwe Nxusani laughs as she poses with the kegs of craft beer she makes. Photo: Samantha Camara

“I feel I’m opening paths for other people. There are many more [black women] within the bigger breweries but within the craft industry it’s mainly male dominated.”

Craft beers have gained immense popularity in the past few years. Nxusani says when she got into the craft beer industry working for SAB speciality beers in 2011 she was one of the first people to make speciality beers for SAB.

“Back then at festivals you’d have five, maybe six breweries having stands but now breweries are fighting to get into festivals. Currently they’re estimating 160 breweries across our country and that’s going to be doubling or tripling by this time next year,” Nxusani said.

When asked which Brewhogs beer is her favourite Nxusani she can’t say choose because “the beers have got different tastes and are targeted for different palates.”