WITH VIDEO: Yebo Gogga not as creepy as you might think

Wide-eyed and eager school learners from across Johannesburg flocked to catch a glimpse of the creepy and slimy creatures at annual Yebo Gogga Yebo amaBlomo exhibition at Wits this week.

Hosted by the School of Animal, Plant and Environmental Sciences the exhibition of curious bugs, plants and animals provides a fun but educational experience.

The theme for this year’s exhibition is Rainbow World which looks at colour in nature and science.

Kids, parents and even grandparents filled the colourful Oppenheimer Life Sciences jungle as they explored the exhibition that also involved tailor-made talks and demonstrations from experts.

One of the main attractions, was “Miss Piggy” the Green Iguana as she is called, who silently flaunted her bright green colour as the grade one school kids stroked her “beard” as one kid said.

One would think that these kids would be terrified of “Wilson” the Corn Snake, but eagerly they pushed and shoved in front to get a better view and feel of Wilson.

“Yebo Gogga” gets some surprised faces 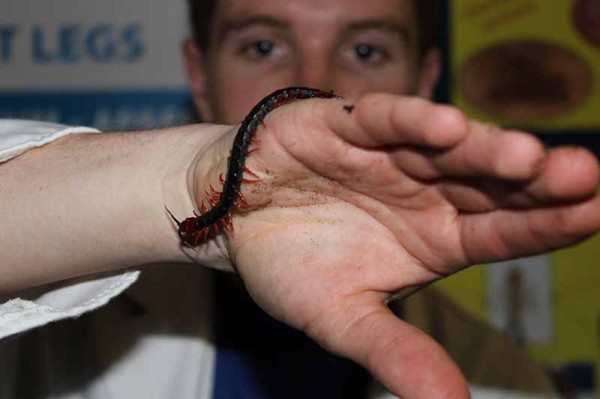 If you want to see the most amazing bugs ever, then you have to visit the “Yebo Gogga Yebo amablomo” annual exhibition at the Oppenheimer Life Sciences building on east campus. It’s open till this Sunday, 12 May.

From cockroaches, slimy worms, snails, enclosed animal embryos to even and rhino poo these were all on display in the Life sciences museum to much awestruck school children visiting.

This is an environmental and educational exhibition held by the School of Animal, Plants and Environmental Studies.   “Yebo Gogga Yebo amablomo” annual exhibition aims to educate the youth about the natural world and to increase awareness of nature conservation.

“Yebo Gogga aims to enable as many children as much access to as many interesting species in nature,” said Cheryl Dehning, the exhibition organiser.

Bugs, worms, animal skeletons, rocks and insects of all species were all on display at the Oppenheimer Life Sciences building on Wednesday morning.

“Today there are ten schools and about 700 children attending the tour. We expect over 1 000 children tomorrow and some nature groups and party groups over the weekend,” Dehning said.

Children came from different schools and arrived at the university where they were assigned guides who took them on 20 minute tours across all the stations set up by the different organisations.

The tour guides were all Witsies who study BSc or Master of Science in Medicine at the university.

“The guides receive a t-shirt after six hours of volunteer work at the exhibition and they can also get a certificate of community service which will aid in their credits,” said Donald Mccallum the exhibition director.

The organisations involved in Yebo Gogga are external and internal members of the expo. There were student representatives from Wits to help. The science and geology departments had exhibition stands on display. Also in attendance to display their wares, were the spider and butterfly clubs, Rand Water, Adler Museum and Joburg Parks and Zoo.

“This is the 14th year Yebo Gogga has been running and the day is going okay, the children are quite excited by what the exhibition has to offer,” said Mccallum.

All the children were given workbooks which had questions they had to complete in order to get them thinking critically about what they were learning.

Michael Snodgrass, a grade seven pupil from King Edward Preparatory School, said, “The expo is fun, except for the work.”

In the coming year Yebo Gogga “aims to reach and get into contact with township schools […] these schools are not able to come to the expo because of financial and transport issues,” said Dehning.