No vote flyers handed out at Wits voting stations

Students campaigning against the SRC (Student Representatives Council) elections today were seen handing out #WhyShouldWeVote flyers next to voting stations on the Wits Education campus.

A number of students from the campus have acted on their  promise to boycott the elections this week as they feel their grievances are not being satisfactorily addressed by the SRC.

Some Wits Education Student Council (ESC) leaders have voiced their support for the campaign.

“We’re handing these flyers out to ensure people don’t vote carelessly, if they are not conscious of their vote, then why are they voting?” said third year student Bedney Morole.  He explained that it was more of an awareness campaign for conscious voting or no voting at all.

Morole said that he would not be voting in this year’s SRC elections.

The flyers read “future teachers’ united #WhyShouldWeVote, we are sick of empty promises. Can we be taken serious [sic]?”

“I believe these flyers are a result of grievances from the students”, said Mokolwane Masweneng, Wits ESC Academic officer.

He said the ESC received grievances from the students and took them to the head of school, but they are still waiting for a response from the dean of student’s office.

“We are not against the parties that are running, but just bringing awareness to students,” said third year student Philip Hlatshwayo, who was handing out the flyers and abstaining from voting. 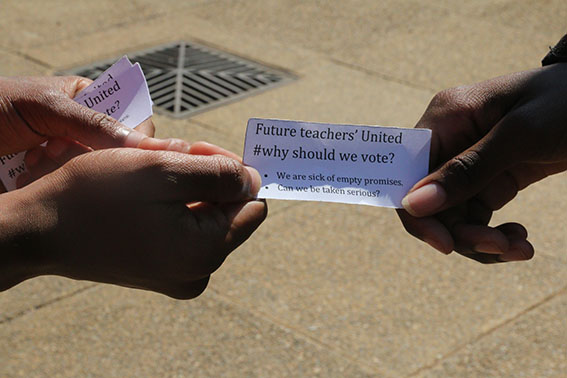 WHY VOTE: A student on Education Campus passing on flyers to make others think twice before they vote. Photo: Bongiwe Tutu

Manqoba Chungwane, second year Education student said: “We don’t even have options for food here, we can only buy from Olives and Plates which is very expensive, so we have to travel to main campus every day for lunch.

Third year Education student Themba Sibeko said ever since he was in first year, there has only been one Kudu terminal for printing.  “We have asked for it to be removed from inside the library so that we can access it when the library closes, as it closes so early, but nothing was done. They don’t care about us,” he said in reference to the SRC.

“How can you have one Kudu Bucks machine for about 2000 students? And one ATM that never works! How can we ever vote when our voices are not heard?” said Thabiso Dlamini, another third year Education student.

“The students have the right to state their grievances and I support this campaign,” said Masweneng.  “I am also not voting, I am representing the students” he said.

Wits ESC Grievances officer Xolani Khoza said the issue is about representation, “It doesn’t say we are not going to vote, but we want to know why we should,” he said.

Khoza would not say whether he would be voting or not, but said that he was in full support of the students.

“I am a student before I am a leader, and tomorrow we will go on for a full day of campaigning if our grievances have still not been answered,” he said.

Students from education campus have been voicing their concerns on the Wits Education Student Council (ESC) Facebook page.

SCIENCE INSIDE: Does boycotting Woolworths create change in Israel?

BDS (Boycott, Divestment, Sanctions) South Africa wants companies to withdraw trade from Israel to force an end to the Israel-Palestine conflict.  But do boycotts work?

Calls for a boycott of the SRC elections by education students have not been endorsed by the student council.

Grievance officer, Xolani Khoza, said they want to separate themselves as the Education Student Council (ESC) from the boycott. “We feel that the boycott is being influenced by political parties.”

However, Khoza said as students of Education Campus they would not be voting unless the grievances they had tabled to management were considered. “We are not taken seriously, so why should we vote?”

Khoza said they wanted a “sufficient explanation” from management. “Maybe then we will vote,” he said.

The grievances that were tabled to university management last year include inconvenient library hours, as it closes at 9pm. The lack of frequent buses to education campus “when main campus is closed” is another issue that was brought up.

Khoza said he had heard of student suicides apparently due to the pressures of student life. “We need these facilities to prevent such instances,” he said.

Project W, leader Jamie Mighti commented on the planned boycott by students on Education Campus: “You boycott the SRC elections, how does that improve the SRC? If students want change they need to vote for the right party.”

The SRC’s liaison officer Jabulile Mabuza said: “Many of these issues are issues that are always raised in university meetings by the SRC but because of the bureaucratic system, we have to go through a number of departments before implementation, this is not an easy thing to explain to students.”

Mabuza said many of the issues on education campus “are not a matter of money but a matter of changing the university’s policy”. She said:  “I believe students have the right to voice out their concerns whichever peaceful way to get their voices heard.”

Responding to a request for more ATMs on Education Campus, deputy vice-chancellor Prof Tawana Kupe said there is a Nedbank machine that was placed there about two years ago on the students’ request. “At that stage Nedbank was the only bank interested,” he said.

The ATM is not used enough to warrant the installation of another one, Kupe said. The cashless campus project should relieve the pressure on ATMs and Kudu Bucks’ machines.

He said there is a budget for the cashless campus project and added that implementation will take place “hopefully by latest April 2015”. 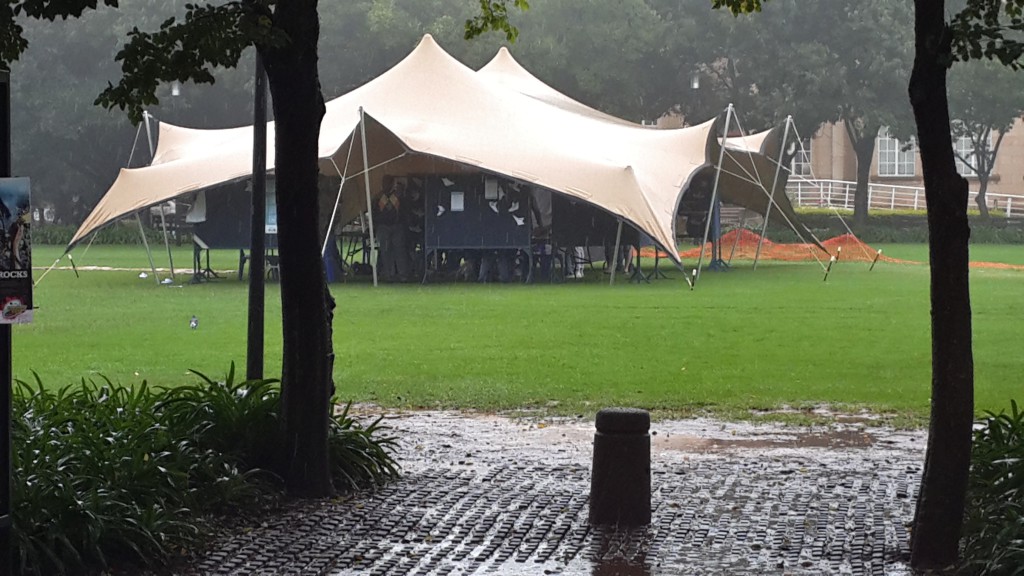 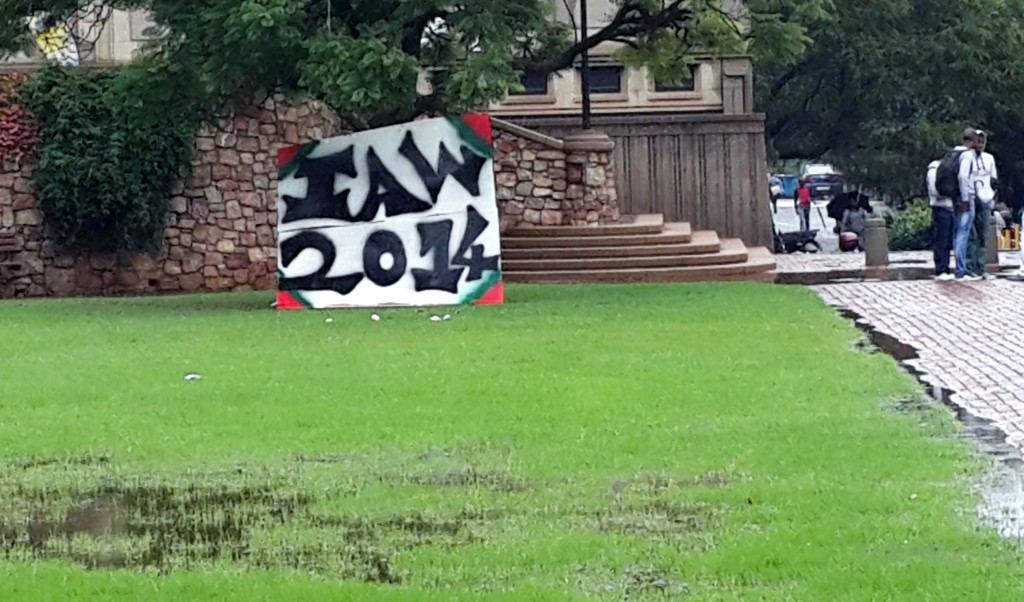 Pro-Palestinian groups call for boycott of “What is Rael”

PRO-PALESTINIAN organisations are calling on South African youth to boycott a group of Israelis visiting campuses next week.

The 24 Israeli youths, whose slogan is “building bridges not boycotts”, are arriving on August 11 for discussion panels and on-campus talks. The tour is called “What Is Rael” and will take place in Johannesburg, Pretoria and Cape Town.

The Palestinian Student’s Campaign for the Academic Boycott of Israeland the Palestinian Youth Against Israeli Apartheid claim What Is Rael members are apartheid agents, camouflaged as impartial students.

Robert Freeman, from the Wits Palestine Solidarity Committee (PSC), says the Israeli group comes with a highly politicised agenda. “In essence this group professedly wants to create a good impression of Israel,” he says.

But the South African Union of Jewish Students (SAUJS), which is hosting the group, claims they do not represent the Israeli government or any other political party.

Roi Wolf, spokesperson for What Is Rael, says they did not receive government aid. “All students are paying for their own flights and SAUJS is helping us fund our stay here.”

Wolf says it is important to show what is really going on in Israel. “There have been narratives created by anti-Israel organisations on South African campuses that have made inaccurate comparisons between Israel and the apartheid regime.

“The media often shows only one, skewed side of the story,” he claims.

“While there can be no doubt Israel is no perfect society, the societal problems faced by Israel are no worse or better than most other Western democracies.

“Robust dialogue, debate and face-to-face engagement is one of the best ways we here in South Africa can contribute to ending the conflict in the Middle East,” says Katzew.

SAUJS says the tour is in the spirit of free speech and boycott is not an answer.

But the PSC’s Freeman says: “If we engage with institutions aligned with Israel we ‘normalise’ them and thereby give them legitimacy. We want action and not empty words.”

The group is expected to be at Wits on August 17. The South African Students Congress (Sasco) is also calling for the boycott of the Israeli group.