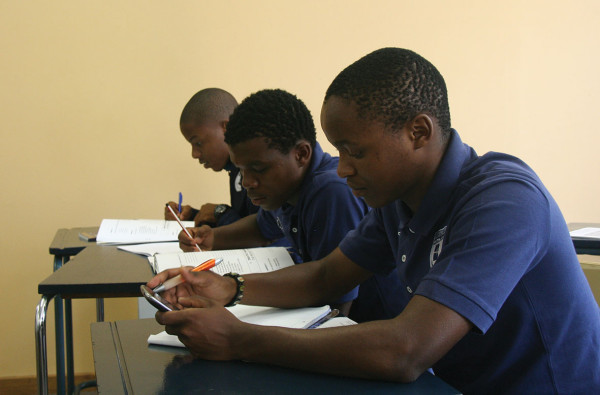 DISTRACTED: Learners from the Bidvest academy in class during their Isizulu lesson. Photo: Palesa Radebe

BIDVEST Wits training academy has been put on the back foot following questions about the academic performance of its students.

“My worry is your article sounds little bit negative towards what we are doing,” said training academy head of development affairs Glen Salmon. Salmon could not provide statistics to tell Wits Vuvuzela how many of the academy’s students completed their studies.“It’s very difficult also within South Africa to cater for everyone, there are some boys who excel, who get fantastic marks, clever boys from privileged backgrounds.

There are some boys from poorer backgrounds, with poorer schooling who struggle,” Salmon said.
Training academy headmaster Mike Crampton blamed the South African basic education system for his students’ struggle to perform academically. He said the students were not able to think “independently” without supervision. Crampton said the academy students were taught with the ‘Cambridge syllabus’ rather than the one used by the South African basic education system.

The Bidvest Wits training academy is a football-training centre with the objective to prepare young players to play professional football. The academy takes students from grade 11 to matric and follows the British Cambridge syllabus, which Crampton said is similar to university standard.

Salmon said the students come to the academy at different education levels “so it’s difficult to cater for everyone, that’s why the Cambridge syllabus is so positive in that way you can teach them on their level”.

Bidvest Wits Training Academy head coach Ashley Makhanya said the academy was set up around the soccer season. The students attend morning and afternoon training sessions, leaving only four hours in their schedule for schooling.
“The students are not chosen based on their academic credentials but more on the football skills, the academy is set up to offer support to their sporting career,” said Makhanya.

A former scholar said the academy was set up similar to a private school and the syllabus was difficult. He said that most players focused more on the soccer rather than schoolwork.
The former student asked for anonymity because he feared speaking to the media would jeopardise his chances of making it to the PSL.