From brutality to beauty 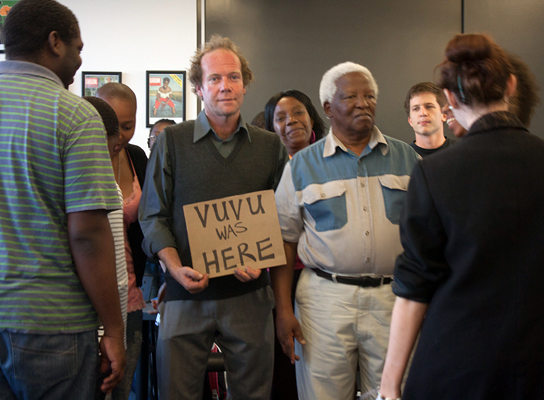 HE was beaten and his nose was broken by a policeman’s baton. He was shot at 17 times. He was jailed and kept in solitary confinement for 560 days.  But that did not stop world-famous photo-journalist Peter Magubane from documenting the atrocities of the apartheid regime.  “My pictures come first, before my life,” Magubane said.

Speaking to Wits journalism students a day after World Press Freedom Day, Magubane described the clever methods he used to get around apartheid-era restrictions on the media. He had the students in stitches when he told them how he hid his small Laica camera in a hollowed-out half loaf of bread and an empty milk carton to take photos of a women’s protest in Zeerust.

“If I have to steal a picture, I will steal a picture,” he said.  Magubane is famous for the photos he took for Drum magazine starting in the 1950s. His iconic pictures of the June 16 uprising helped to alert the international community to the oppression under the Nationalist government.  “The entire world looked upon Drum magazine to know what was happening in South Africa,” he said.

Magubane, who was also Nelson Mandela’s official photographer during the transition to democracy, urged the aspiring journalists to continue to use the media as a force for change.  “The struggle is still on … [Even] with democracy, there is still a lot that is happening that is unacceptable … People are still poor. We still have a lot of imbalances.”  Magubane displayed a remarkable lack of bitterness despite everything he endured under apartheid.

But now he focuses on beauty, not brutality. He said his current projects include capturing Soweto sunsets.  “I am in love with the sun setting in Soweto. It’s like seeing a beautiful woman every day. Watch the sun when it sets … So much peace. No blood. No death …”