Books for no bucks 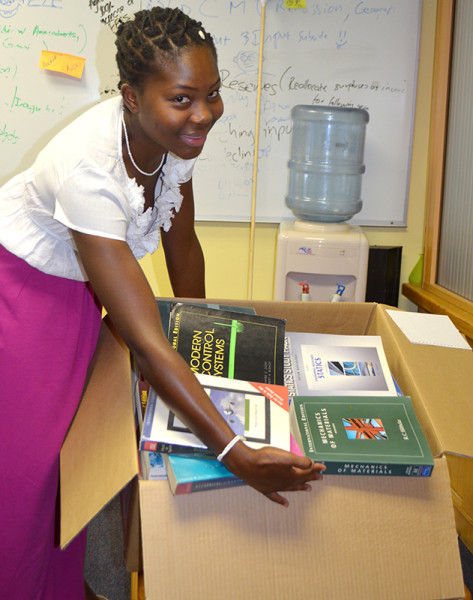 FREE BOOKS: Charmaine Pule, Media and Marketing Officer for the SRC shows Wits Vuvuzela some of the books they have collected for their book drive. Photo: Pheladi Sethusa

WITS students now have the opportunity to loan textbooks for free. Paul Maluleka is the brains behind the SRCs latest campaign that collects textbooks and books for students who cannot afford to buy books.

Earlier this year the SRC was involved in helping excluded students with their problems. They frequently complained that buying books and textbooks was a problem. They cannot all afford to buy new textbooks each semester.

The book drive is one way of fixing that problem said Pule, 4th year Education and Media and Marketing Officer for the SRC. She is running the book drive in conjunction with Maluleka in a bid to help alleviate some of the stress that students face when it comes to lack of access to resources.

They are looking for students to donate their old books to the campaign. Donated books will be given out on loan to students in need.  It’s a fairly simple process whereby students need to fill in a form from the SRC office. The students loan the books for however long they are needed..

So far, the SRC have received engineering and law textbooks. While this is appreciated, they need more textbooks and books from across all faculties and disciplines to broaden the campaign’s reach.

In line with the book drive, the SRC will be launching  a campaign called ‘Each One, Teach One.’ This campaign will look at donating a variety of things to matric students. Things like stationary, school uniforms and matric dance dresses. The objective of this campaign will be to support matric students who are in need. When dropping off the donated items, SRC members will also hand out food parcels and interact with the students.

TWO WITS residences, Sunnyside and Jubilee Hall are running a campaign to collect sanitary towels for girls who cannot afford them.

Between February and April, the two will be competing to see who will collect the most tampons and pads. The initiative was started by Witsies Mandy Ntsie and Kgomotso Mokaba. They say that this is their way of giving back to society.

Ntsie and Mokaba want to get everyone involved: “We want to raise awareness on the issue and we want everyone to be involved.”

Students, who want to help, can drop off a donation of sanitary pads at either Sunnyside or Jubilee hall.

Forty percent of girls do not go to school during their menstrual period because they cannot afford to buy sanitary towels, a UN study revealed.

Without pads or tampons, the girls end up having to stay at home during their periods. They end up using cloths, tissues or newspaper.

On average, a girl goes on her periods for four to seven days every month, which means those who do not drop out, could be missing about 84 days of school every year.