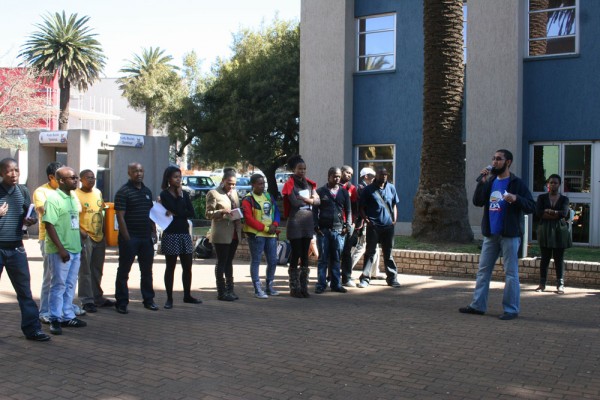 THE Wits Student Representative Council (SRC) candidates held their electoral circus to deliver manifestos and campaign for votes this week.

The key issues raised this year were academic exclusions and economic inequalities on campus.

Murray noted that more students were walking past rather than being part of the electoral debate and that voting has declined over the past years.

“The problem [at Wits] is that … we are the playground for the political parties that are outside the university. We need to have people who represent the students at the top and who aren’t following an agenda of people from the outside; people who won’t be voting out their president because he doesn’t believe in Julius Malema,” Murray said.

The crowd seated outside the library broke out in applause and hands went up enthusiastically to pose questions to Murray.

Klaas Mokgomole , a2nd year law student, said: “ I am very sure that your are not at res and don’t know the conditions at res, secondly, I’m sure you are not using financial aid and don’t know how it is to be a financial aid student, that’s what I get from you. So, my question to you is, how are you going to function in the SRC because you will be alone in the committee, so how will you make change?”

The PYA emphasised the record-breaking success it had last year ,in which it held all 15 seats on the SRC, and in helping 67% of excluded students attain readmission into the university. The possibility of the students who return after exclusion being successful after readmission was questioned when the floor was opened for questions.

PYA candidate Kabelo Ramathesele’s response was, “We look at the reasons that caused a student to end up being excluded. Most of the students are excluded due to situations at home. We help them out of their compromising situations, whether it’s financial or someone has passed away. We find the counseling that is appropriate in those [areas]. We have a rate of students who have come back, passed, graduated and are successful today.”

Daso candidate Mohammed Sayanvala delivered their manifesto, saying it is driven by the DA’s vision for an open opportunity society for all, despite having heard people during campaigning on campus saying that the DA does not recognise the inequalities that exist among students on campus.

“As the Daso SRC, we would like to work with management and not against it. How far have protests gotten us with regards to issues like financial aid? On the issue of exclusions, having so many students excluded and then brought back into the university is a waste of resources. What we need to do is tackle the issue from the source, by finding out why students are being excluded, assist them to pass and provide the opportunities to them.”

Cope Student Movement candidate, Bandice Ngidi, was questioned on why he was a one-man show when his party has more than one candidate running for SRC elections.

Elections take place on August 23 and 24.  Election circuses will continue on Main Campus next week.