INFOGRAPHIC: The truth about fake news

Spreading fake news can have legal and other dangerous consequences.
END_OF_DOCUMENT_TOKEN_TO_BE_REPLACED 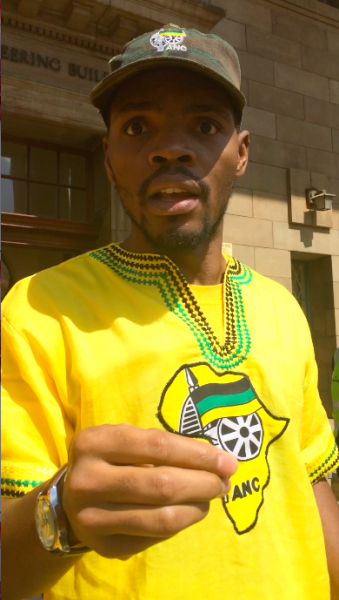 WHAT’S IN A NAME?: Mcebo Dlamini says the #Sisulu controversy did not affect his political standing. Photo: Luca Kotton

Wits student Mcebo Dlamini, who falsely claimed to be a member of the prestigious Sisulu family, does not believe the controversy will affect his campaign for SRC.

Dlamini, who is the chair of the Wits Junction house committee, claimed to be “Mcebo Freedom Sisulu”, the lovechild of renowned journalist Zwelakhe Sisulu and a Swazi princess but later admitted to Wits Vuvuzela that this was a lie.

Credible campaigning
Dlamini is now running for SRC as a member of the Progressive Youth Alliance. When asked if he would be campaigning as “Dlamini” or “Sisulu” he replied: “I am campaigning as Mcebo!”
“Some of us are not made by our surnames. Your surname does not define you,” Dlamini told Wits Vuvuzela.
However, Dlamini continues to namecheck the Sisulu family. During a Wits Townhall on August 4, Dlamini asked a question from the audience identifying himself as “Mcebo #Sisulu”.
He told Wits Vuvuzela that his credibility is not affected.
“I’m defined by my character. Only Vuvuzela defined me by my surname,” Dlamini said. “My leadership is not defined by my name.”

“I am always with the marginalised”

He told Wits Vuvuzela that he was a “humble” and “open” person who engaged with all kinds of people. He said he did not hang out with people based on “class” or how important their family is.
“I am always with the marginalised,” Dlamini said.

Confident leadership
The PYA is a coalition of student organisations including the ANC Youth League, SA Student Congress, Young Communist League and Muslim Students Association.
Dlamini said it was not his ambition to be on the SRC and he was asked to run by the PYA. This showed the organisation had “confidence” in his ability to lead.
“It is not my choice to run. It is the confidence of the students who say, ‘you can lead us’,” he said.
Dlamini had also claimed to be studying a “secret” nuclear physics degree at the University of Pretoria. When contacted by Wits Vuvuzela, the university said no such degree existed.
Dlamini said he would not contest statements that he was studying toward a nuclear physics degree. He said Wits Vuvuzela journalists did not have proof to dispute his academic records.
“It’s the people who decide who must be the leader … We can’t deprive students from the opportunity to vote for a leader based on an article that hasn’t been tested,” Dlamini said.
He said the revelations about his deception published in Wits Vuvuzela had not affected his political standing.
“It has had no impact on me,” Dlamini said.
“Mcebo the person still lives … I know who I am, I don’t need a newspaper to define me.”