Being queer in South Africa 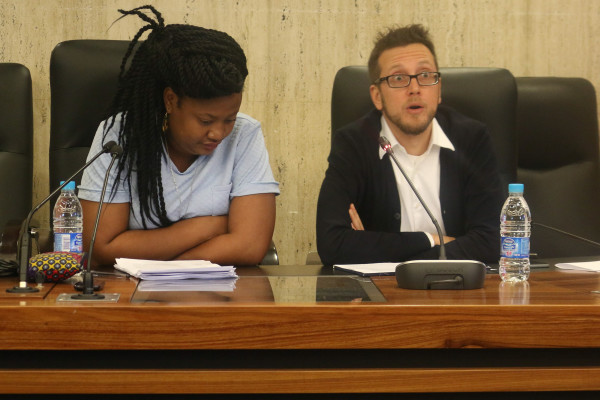 WITS academics Danai Mupotsa and Julian Brown spoke at an academic symposium as part of the Varsity Pride Week to share their research into lesbian, gay, bisexual, transsexual and intersex (LGBTI) people. Their research focused on changing spaces in an African context.

The symposium was structured loosely as a free flowing discussion where the speakers would introduce a set of ideas to be discussed.

Tish White, project administrator of the transformation office and also a partner in Varsity Pride week, said the symposium was put together to honour people who have done work in these spaces.

“I’ve worked historically on women in particular, on questions of sex, sexuality, pleasure, pain, etc,” said Mupotsa who is a lecturer in the department of African literature.

The lecturers attempted to pre-circulate certain readings so those attending could have an idea of the topics up for discussion.

She shared readings by Bibi Bakare-Yusuf and another from Eve Sedgwick’s book, the Epistemology of the Closet, which have influenced her research as they are provocations around queering on or in Africa.

“They are preoccupied with the foundations of knowledge of self and how they set the grounds for our inability to speak to or rupture the very relations we’re interested in,” said Mupotsa about the readings.

She tried to base the concept of being queer within the South African context as well as deconstructing the category of women.

Julian Brown, a Political Studies lecturer at the university, focused on the role of gay rights in human rights of South Africa.

“There is a range of questions about the extent to which queer politics, queer theory and queer identity is compatible with institutions and structures of power in society in general,” said Brown.

He started to answer this by basing the discussion on a particular court case between the Methodist Church of South Africa and Ecclesia De Lange, a lesbian minister within the church.

Brown said that De Lange was a minister of the church and had been living with her partner on church grounds for over two years when she announced that she was going to get married.

After hearing this, the church then took away her ministerial title after which De Langa took the church to court. In this context Brown looked at the struggle in the relations between queerness and institutions of power.