Scribbles and Nibbles: For students by students

TWO Wits Law students, Khanyisile Madonko, 22, and Ritondeni Matamela, 23, have found a savvy way to make money by opening a café and restaurant, Scribbles and Nibbles. 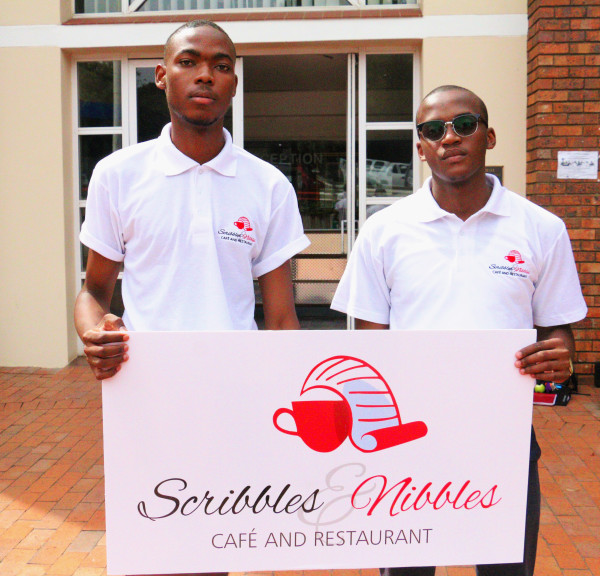 The café is located on West Campus at David Webster Res, far from the centre of the university and the Matrix – the largest food court space on campus where most students find themselves grabbing something to eat and socialise.

Scribbles and Nibbles is aiming to cater for students around Wits.
Madonko and Matamela wanted to target students on the Wits campus, and provide a convenient location that was not Braamfontein.
With the distance being an issue from the Matrix, the Scribbles and Nibbles team has thought of a different way to get to students on campus: delivery.
“Delivery will be to Wits and Braamfontein and how we will be getting it to you is with bicycles,” said Matamela.

Matamela and Madonko declined to talk about the specifics of how their business got off the ground but they said they owed it to their “networks”. They said that while it was a challenge to manage university work and the business it was “doable”.

Madonko said that finding time to think of a sustainable business plan that looks at student empowerment is their main mission.
“Every university has tuck shops but does not have structures that empower students … This business is for black empowerment,” said Madonko.
Matamela said they chose the name “Scribbles and Nibbles” because it had a catchy ring to it.
“It was a name I fell in love with, you would want to say it all the time,” he said.

The David Webster Hall debating team will continue to fight what they believe was their unfair elimination from the All-Residence debating tournament, which took place earlier this month.

The team was eliminated on August 4. Team member Olwethu Peter said the reasons given by the judges were not sufficient to justify their elimination. He said the judges did not pay attention to some of their arguments. They also claim the opposing team broke the rules.

“Our major concern was that the Men’s Res reply speaker raised new points in reply to our argument. The rules state that a reply speaker is only allowed to use argument points raised by two previous speakers on his/her team.”

In an email to the David Webster team, Head of Residence Life Rob Sharman said it would be difficult for anyone who had not been present at the debate to solve their issue objectively. However chairperson of the David Webster team Godfrey Dlamini said he intended to call another meeting with Sharman.

In an attempt to resolve the dispute, All Residence Council Student Development Officer Marie Lugalya said she had tried to organise a review with the judges. “They promised to meet with the organisers and team members, but up until this day have not showed up.”

In the meantime, the David Webster debating team refused to attend the All Residence debate dinner at which they were to receive certificates of participation. Dlamini said the team felt this attempt to resolve the problem, by Sharman, would undermine their house.

“ARC [All Residence Committee] chairperson Justice Nkomo has failed to resolve the unfair elimination of our team. He is too busy minding his SRC election business,” he said.

The David Webster team is not the only house to have been angered by the debating contest. The Wits Junction debating team was “furious” when the venue was changed from JCE to Medhurst without their knowledge. The team was disqualified for their absence in the first round of the tournament.

“We arrived at JCE to find no one there,” said Wits Junction Academic officer, Samantha Ncube. “We waited there for 45 minutes with my four-member debating team. The ARC did not respond to our calls and emails. To our surprise they sent out an email thanking residences that had participated in the debate later that day.”

Commenting on the issues of both teams, Nkomo said he and Rob Sharman sat down with the David Webster chairperson and the Wits Junction vice chairperson in an attempt to resolve the matters.

“We have apologised for the breakdown in communication. Rob Sharman and I are organising an event in acknowledgement of the David Webster and Wits Junction debating teams. However the decision to hold another debating competition would be unfair to the teams that won.”

Sharman was not available to comment, since he is away.

Wits Junction will soon host an internal debating tournament to compensate for their absence at the All Residence debating Tournament.