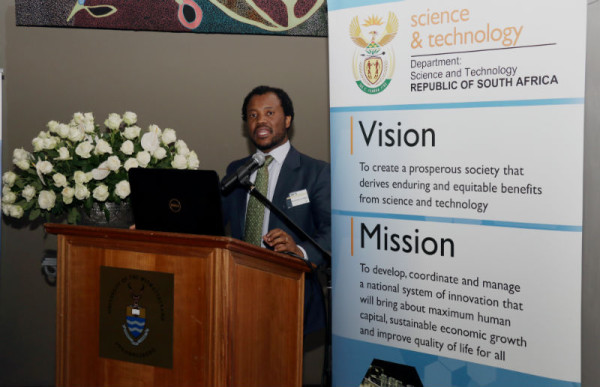 Wits’ new vice chancellor and its SRC president have similar visions for the future of the university in the next ten years which they expressed in different ways yesterday at Professor Adam Habib’s installation ceremony.

Habib was officially appointed as Wits’ vice chancellor and principal in a ceremony presided over by Wits chancellor Justice Dikgang Moseneke. SRC president Sibulele Mgudlwa stole the show with his light-hearted speech that struck the right chords.

Mgudlwa, said his speech from the perspective of a letter written to him by an SRC president leading in the year 2023.

Mgudlwa’s fictional 2023 SRC president wrote the letter from her flat in Soweto off her iPad that she received for free at registration. She told “dear Sibu” that the university’s WiFi had a reach across the city of Johannesburg.

In 2023 there was no such thing as discrimination based on race and poor students were taken care of to the extent that no students were sleeping in libraries, or sleeping with empty stomachs. Mgudlwa said in 2023 sexual harassment was a myth. He had the audience laughing loudly when he said that the Wits University of 2023 did not charge students for protesting, alluding to the charges against 11 Witsies for their involvement in a protest.

In Habib’s speech, he referred to inequality as South Africa’s Achilles’ heel. Habib said his vision was for an “Afropolitan dream” to drive South Africans and all at Wits University.

Habib said the essence of this dream as defined by Wits Humanities scholar, Achille Mbembe, is: “A commitment to the country, continent and globe; where we are at one with being African and human”. Habib said Wits was committed to addressing issues of transformation and diversity and apologised to those who had faced discrimination of any kind in the past.

Habib also spoke about what it means for Wits to be a world class university. He said it was important for Wits to compete in its own right without imitating the foreign. “It is the responsiveness to one’s contextual specificities that enhances a university’s ability to make unique contributions to the global corpus of knowledge.”

Mgudlwa said in 2023 Wits would sit firmly in the top 100 universities of the world.[pullquote align=”right”]“We trust that you will lead this university to greater heights and if you do not, we have you on Twitter.” [/pullquote]

Mgudlwa said he hoped that Habib would focus on students and listen to students on university issues. He said if Habib was not accountable to students, they would express themselves one way or the other.

“We trust that you will lead this university to greater heights and if you do not, we have you on twitter.” The ceremony was attended by a number of local and international dignitaries including Ahmad Kathrada, vice-chancellors of a number of South African and African universities, Advocate George Bizos, Dr Mamphela Ramphele, Moeletsi Mbeki, and the Minister of Science and Technology, Derek Hanekom who delievered a speech as well.