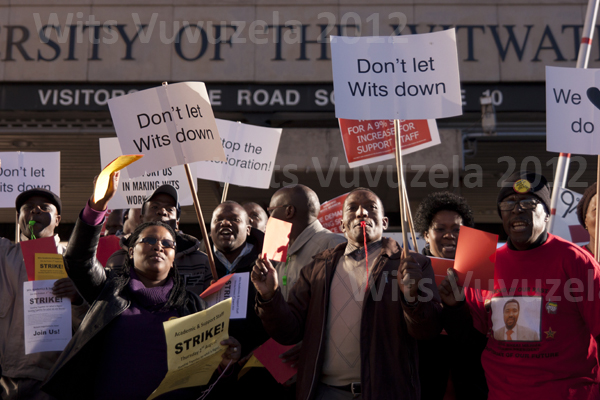 Staff unions at Wits have declared a dispute with management after negotiations faltered last week.

Unions and management have been in negotiations since management announced inflation-linked salary increases last month.

Prof Patrick FitzGerald, deputy vice chancellor of finance and operations, said the negotiations were intended to reach a settlement but some unions took positions which made it “very difficult”.

Adele Underhay, president of the Administration, Library and Technical Staff Association (ALTSA), said unions rejected the offer based on their members’ mandate.

“I think we all realise that it doesn’t help that we push management and they can’t afford to give us an increase,” said Underhay.

Underhay said although the increases are in line with the inflation rate, predictions for inflation are much higher and staff, especially in the lower grades, complained about the increasing cost of living.

“What could happen in regard to the inflation rate in the future is obviously out of our hands,” said Fitzgerald.

The unions will approach the Commission for Conciliation, Mediation and Arbitration (CCMA) and appear before a commissioner who will hear both sides and could grant them a certificate for industrial action.

“It’s bad for everyone but if that’s what it’s going to take, our members have said that that’s what they’ll do,” said Underhay.

The unions proposed that non-union members should not receive any further increase that is negotiated as they would benefit unfairly.

Together, the National Education Health and Allied Workers’ Union (NEHAWU) and ALTSA represent 48% of around 2300 support staff. The Academic Staff Association of Wits University (ASAWU) represents at least 50% of staff.

Last year, management rejected ASAWU’s proposed salary increase, which would have cost the university around R60m to implement.