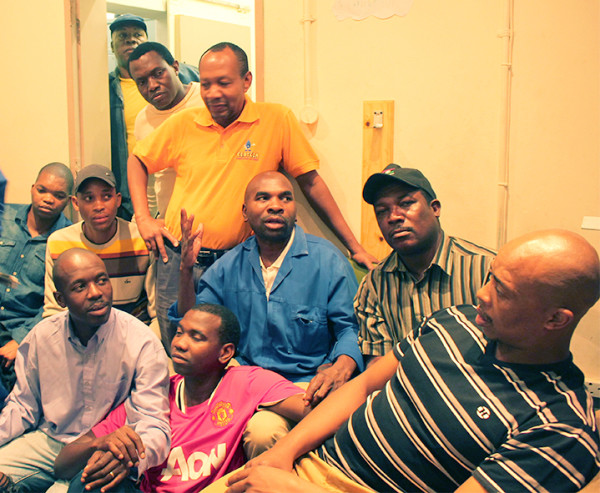 Lights out for electrical workers

NO POWER: Outsourced electrical workers at Wits have not been paid since January and have not returned to work for several weeks. Photo: Roxanne Joseph

Electrical workers employed by a Wits contractor allege that they have not been paid for six weeks, but they will not be getting any help from the university administration.

The outsourced workers, who are employed by MJL Electrical, have complained to the Wits Legal Office and activist groups but have not yet seen their back pay.

Trouble started for the workers when they noticed they had not been paid for the month of December, with both their salaries and bonuses outstanding.

According to one of the workers, Aubrey Saku, they were eventually paid in early January, but not the full amounts they were owed. Since then, they have not seen a cent from MJL Electrial.

Prof Beatrys Lacquet, the deputy vice chancellor of infrastructure and operations at Wits, said the university has paid what it owes to MJL Electrical two weeks ago.

She said the responsibility for paying the workers is with MJL Electrical and not Wits.

“MJL management is responsible to run the company and comply with all legislation and regulations,” she told Wits Vuvuzela.

When reached for a response, MJL Electrical owner George Cresswold told Wits Vuvuzela that he does not want to comment on the dispute until he has met with the university and “given the process proper opportunity to take its course”.

“There is a solution,” he said. “And we are committed to making this work.”

A month later they were again not paid and have not worked since February 9.

The workers also allege that when they were paid for the month of December, they were not paid in full.

“We all worked for 10 days, but some of us were only paid for eight, or seven … We all had money deducted from our salaries,” Saku said.

Saku said Cresswold assured them they would be paid in full and the electricians continued to work for another month.

However, a month later they were again not paid and have not worked since February 9.

Cresswold again promised they would be compensated on Monday this week, but that deadline came and went without payment.

The workers allege that Cresswold had been deducting tax from their salaries but they said they have never received IRP5 documents, the proof that their taxes had been paid to SA Revenue Service (SARS).

When confronted, workers said Cresswold admitted that he has never submitted their withheld money to SARS but promised he would, according to Saku.
“He has been chowing it,” Saku said.

The workers said in January that MLJ Electrical, which had been contracted for electrical repairs for the university, had run out of supplies which left them unable to do their jobs conducting necessary maintenance to Wits electrical system.

Lacquet said MJL is not the sole provider of electrical services at Wits and if they cannot do the job, the university had other outsourced companies at their disposal.

“If MJL cannot deliver a specific service at a time, Wits can get an alternate provider and vice versa regarding another service provider.”

The workers responded to the lack of materials and previous payment issues with a go-slow, at the beginning of January.

On Friday February 6, they arrived at work to find they had been locked out.

Cresswold continued to refuse to pay them and did not provide a reason, according to Saku.

Two weeks ago they were temporarily suspended.

During a meeting with the Wits Legal Office several days later, were told the process to suspend them had been unfair.

“We [the workers] were in the right … Cresswold said that we were striking, but we weren’t,” said Saku.

Wits Legal Office declined to comment to Wits Vuvuzela for this story.

Dr Shireen Ally of Sociology, an activist with the Wits Workers Solidarity Committee, told Wits Vuvuzela that after the university intervened, Cresswold and the workers reached a verbal commitment that the suspensions would be cancelled and the workers “indicated this was subsequently received in writing”.

However, Saku said they would not return to work until they have been paid.

The workers have returned to Wits a number of times to try and resolve the issue and are “frustrated” with not having been paid.