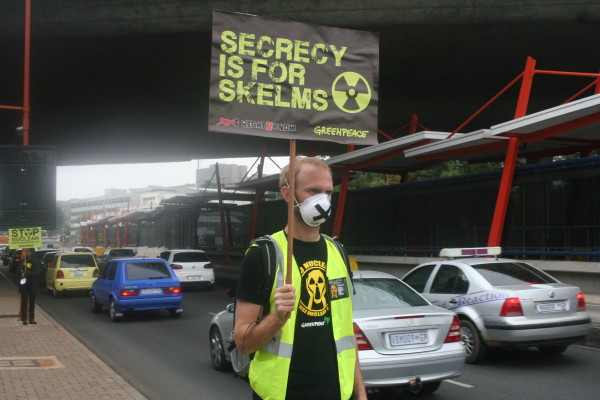 Toxic secrets: One of the activists standing firm during the silent Protest on Empire road.

Greenpeace Africa organised a silent protest on Empire road to commemorate the second anniversary of the Fukushima disaster, earlier this week.

A group of activists lined down Empire road wearing black t-shirts with gas masks, holding posters reading “Secrecy is for Skelms and Not another Fukushima”. This was done to oppose the secrecy within the South African government to build nuclear programmes.

The protest was also called for transparency in Nucleur building projects.

The Fukushima earthquake struck Japan two years ago, which was followed by a tsunami leading to the biggest nuclear disaster since Chernobyl.

According to Ferrial Adams Greenpeace Africa climate and energy campaignerthe government is planning on extending nuclear energy with a 9600mw input in the country”.

Adams said that the government has been silent after the announcement of the nuclear extension.

“The Fukushima nuclear disaster revealed considerable corruption in the nuclear power sector. However the South Africa government has not learnt from the fukushima disaster “Adams added.

Greenpeace has submitted two requests to the Department of Energy to access information, in order to get a full understanding to South Africa’s nuclear plans. Adams said the first application was refused and the second one has not received a response to date.

“Our government continues to operate in secrecy by withholding basic information, if we are serious about a clean, safe energy future then the need of our people must be put ahead of that of the nuclear lobby,” she said.

Adams hopes the protest create awareness on the danger of nuclear energy. “Greenpeace calls on the South African government to stop its nuclear plans and transform rhetoric to true commitment in expanding the renewable energy sector,” she said.