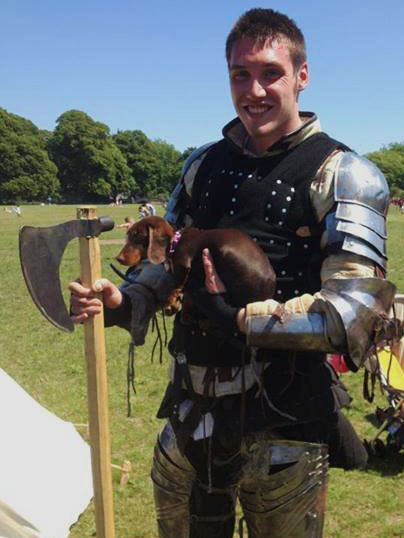 MEDIEVAL MAN: Wits Masters student Griff Gigler participates in a sport known as Full Contact Medieval Combat. (No puppies were harmed in the making of this photo). Photo: Provided

A real-life knight in shining armour has arrived on campus.

Okay, so the shining armour might be a slight exaggeration. Welsh exchange student Griff Gigler’s armour isn’t that shiny. And he isn’t exactly a knight. But he does participate in Full Contact Medieval Combat (FCMC), which beats being a knight any day.

Currently completing his Masters in Geology at Wits, 22-year-old Gigler is a force to be reckoned with. Actually, don’t reckon with him – unless you have armour made out of steel and are prepared to battle it out with blunted weapons and pure strength.

FCMC – abbreviated because, according to Gigler, the full name is “a bit of a mouthful” – is a full combat sport in which participants suit up in steel armour and proceed to take down the opposition with blunted weaponry and a series of wrestling moves.

Based on medieval history, FCMC is not scripted battle re-enactment, which is common in the United Kingdom. The sport involves real fighting, real steel weapons and is governed by a set of rules and regulations.

FCMC involves “a lot of wrestling” and “whacking people on the head”, says Gigler. The sport makes use of weapons like swords and axes and, although “it’s not actually anywhere in the rules that you can’t kill somebody, [that’s] not the idea” of the sport. Good to know.

Rules state that participants can only aim for “accepted zones” on the body, which exclude open face areas, back part of the neck, feet and back of the knees.

[pullquote]“He tore the ligaments in his knee when his teammate accidentally hit him with a two-handed sword.”[/pullquote]

Participants need to be fully armoured, with a cushioning of sorts underneath. The main manufacturers of the uniforms are in Eastern Europe. However, Gigler says “there are a few guys who make the kit here [South Africa]” but the concept is still “very new here” and so the kits and the sport aren’t yet up to international standard.

There are different divisions in FCMC, and there can be solo or group fights.

“In the group categories, it’s just basically the team that’s left on their feet at the end that wins. Once you get knocked down, you’re out, you’re not allowed to get back up.”

Gigler was at one stage the vice-captain of the UK team and has participated in numerous competitions. At a competition in France, he tore the ligaments in his knee when his teammate accidentally hit him with a two-handed sword.

Although there are no requirements for the sport, it’s not for the faint-hearted. If “you’re tough and can fight”, then go for it, says Gigler.

However, don’t be fooled by what seems like a “manly” sport. An increasing number of women have  taken an interest in FCMC and there are now ladies’ divisions. Who says women can’t do the knight in shining armour thing for themselves?

When it comes to locations for tournaments, castles are often “pretty keen” to host these events as the tournaments attract a number of visitors. Speaking “medieval English” isn’t a prerequisite at competitions, but Gigler says you’re welcome to do so if you like.

Gigler only started participating in the sport, which is a relatively recent development itself, at the end of 2012. He met the guy who was putting together the UK team and he (Gigler) took a “why not” approach and decided to go along to a training session.

The rest, you could say, is (medieval) history.