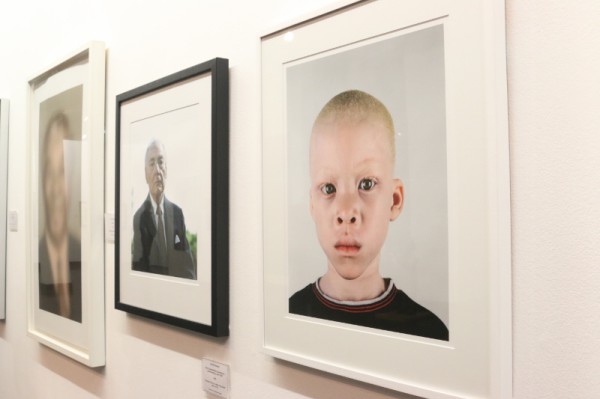 The exhibition, From Sitting to Selfie, creates a history of the phenomenon of taking  ‘selfie’. Photo: Tendai Dube.

“There is a lot of variety, it covers a long period of time”, said Sue Isaac, gallery administrator.  The exhibition showcases 300 years of South African portraits, dating back to the 1617 with two portraits by Cornelis van der Voort, Portrait of a Gentleman and Portrait of a Lady.

The collection is proof that the obsession with one’s image has been around for much longer than Instagram selfies.

Capturing a moment in time is not necessarily external; art was created from a retina image from a visit to the optometrist. Another of metal carved into a skull by laser.

One of the more lighthearted time-stamps is a self-portrait of Mikhael Subotzky by Marc Nicolson after being stung by a bee in 2004.

“It’s like looking at Facebook, I just don’t get it [selfies]”, said Linda Engelbrecht, an art aficionado who visited the gallery. “I can’t imagine why people would want to publish bad photographs of themselves”, she added.

Curator Barbara Freemantle explained that sitting portraits in the past were done to “best capture the essence of another human” while selfies are “a memento or to document the photographer’s own presence at a particular occasion.

“I think it’s just a popular fad at the moment which I think will run its course, maybe not because we are all pretty egotistical, so perhaps it won’t”, said Isaac.

The exhibition ends on September 6 and is held on the corner Simmonds and Frederick street.