END_OF_DOCUMENT_TOKEN_TO_BE_REPLACED

Zainab Patel is a student journalist at Wits Vuvuzela. She has documented her families’ activities during the lockdown at their home in the north of Johannesburg.

END_OF_DOCUMENT_TOKEN_TO_BE_REPLACED

Gaming tournament at Wits was a knockout with some worthy winners receiving a monetary prize.

END_OF_DOCUMENT_TOKEN_TO_BE_REPLACED 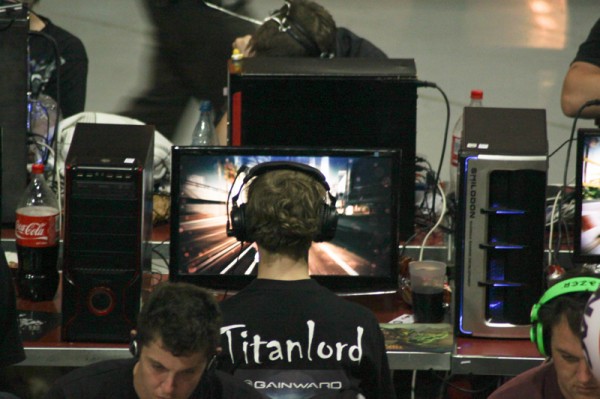 Studying can be all fun and games

WITS may be turning 90, but it’s not too old for games. The university has just introduced the first degree that specialises in game design in the country.

Competition for the first intake was stiff. Lecturer Hanli Geyser said only 25 of the 98 applicants were offered places after writing an essay and attending an interview.

“It was not enough for applicants to say, ‘Oh ja, I love playing games’. The selection committee looked for “an understanding of games, academic strength and passion. People who aren’t absolutely committed aren’t going to be able to make it through”.

Game design is offered as a bachelor of engineering science in digital arts, or as a BA PVA course.

Engineering students focus more specifically on the technical aspects and the visual arts students on the creative areas of game production.

Geyser, whose father introduced her to computer games, said there was a misconception that games were only for boys. “It’s simply not true … Lots of girls play, just different types of games.”

She criticised superficial efforts to attract female players. “No, making it pink or putting in a My Little Pony isn’t going to make girls play. It’s about whether the community is receptive to women or not.”

Geyser described the issue of women in game design as a layered and complex problem.

She said children’s media, toys, parents and schools discouraged girls from going into the sciences. “It’s systemic,” she said.

Michèle Dykes, one of only three women studying game design, said girls are stereotyped in games.

“All the girls [in games] have big boobs and are always showing them. It’s meant for more of a male target market,” said Dykes. She said she would draw female characters and focus on their personality rather than their looks.

Tokelo Seremane, who started playing in primary school, also intends to design games with female leads. She decided to do the game design degree to change the stereotype of game designers.

“When people think ‘game designer’, they think of a tall, nerdy guy with long hair.

“They don’t think of women.” Seremane believes men underestimate women in the gaming world. “Guys who challenge me to games like Fifa say, ‘I’ll kill you’. That’s not true. I squash them!”

Wits students are told to “work hard and play hard” in their first year welcome speeches. They are now taking this literally with regular visits to the newly opened Chialan’s Gaming Lounge in the Matrix.

This raises questions of whether playing console and computer games on campus will be a form of recreation or distraction for students.

“With school I get really stressed, so this is a good place to come relax and release pressure,” said Jonathan Tshiswaka, a 1st year actuarial science student.

Tshiswaka visits the gaming lounge almost every day, and like many other students, views it as “a great place to go ‘chill’ with friends and have a bit of fun”.

Having been a university student himself, Chialan Govindasami, the owner of the gaming lounge, decided to add “colour” into the daily campus routine.

“I know what I wanted as a student. You need a release and some people find that release through [playing] games,” he said.

The gaming lounge houses PCs, Playstation 3 and Xbox games which students can play at 15 minute or hourly intervals for R9 and R30 respectively.

Witsies can be seen playing a wide variety of games daily and regular gamers have already been established.

Govindasami accounts this to “genius on his part in offering games which students enjoy playing. “I assessed what games were popular so there is a broad spectrum of good games.”

Joseph Mongwai, another 1st year student sees value in playing games and said: “When I’m in a lecture I think critically and playing games requires critical thinking as well. It helps me in that way.”

However the BA law student admitted that time is a problem for him. “It really tests on time, management; you could skip classes for games.”

“I think it’s up to the individuals to manage their time,” said Govindasami. The owner believes that the game lounge is a “good thing for this campus. I’m trying to deviate from the norm associated with being at varsity,” he said.