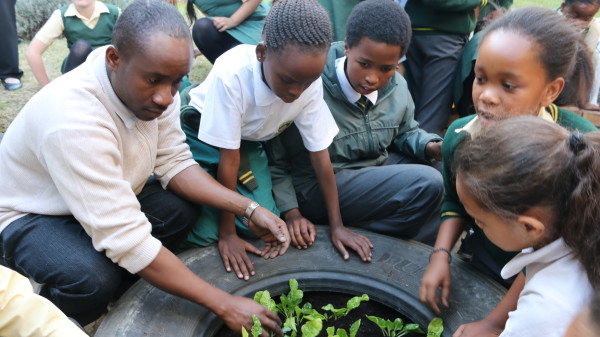 Large tyres filled with leaves, torn newspaper and vermicast soil  are some of the ways Wits society Generation Earth is helping to spread the word on environmentally friendly living.

“We have to share our knowledge on sustainable gardening with the school kids because they are the future of this country,” said Felix Donkor, an Animal Plant and Environmental Sciences (APES) PhD student and executive committee member of Generation Earth.

Founder of Generation Earth and teacher at Mondeor primary school, Ella Bella Elaine Constantinides, said the school had previously attempted to plant a vegetable garden but it was unsuccessful and fell apart with most of the vegetation dying.

“Now Wits Generation Earth is teaching us how to sustainably plant, grow and take of our garden,” said Constantinides.

Eleven-year-old Madison Bailey told Wits Vuvuzela that she and her sister chose to join Generation Earth because “we love the plants and flowers.”

A third-year Fine Art student and Miss Earth semi finalist, Jessica Janse Van Rensburg, attended the historic event as she has a fierce passion for the environment.

“Joburg is a beautiful city and we need to teach the young guys how to take care of it for their sake as well,” said Janse Van Rensburg. She told Wits Vuvuzela that she feels young people need someone to look up to, someone to act and inspire them to do the right thing.

Glenanda primary school head prefects were also there in solidarity with the greening initiative. Deputy head girl, Keisha Ras, said that she feels it is important to have more trees and go green. “It’s an honor for us to do this especially with a Miss Earth finalist,” she said.

Local community builder and leader, Robert Winter, said “these kids absorb information and they go on to do it themselves at home, sustainable living becomes a part of who they are.”

Winter is more than happy to teach the children about gardening, soil types, plant uses and everything to do with green living.  With over 100 plant cuttings in his garden and two water tanks, he has much experience on environmental sustainability.

Greener Wits on the cards

An environmental consultant has encouraged Wits to take the lead in plans to save the planet.

The harmful effects of greenhouse gases on the atmosphere are widely documented and include global warming, ozone depletion and adverse effects on biodiversity.

Wayman said the campus looks clean and has litter bins. But she called on the university to improve its waste management because litter was destined for landfill.

This results in waste not breaking up properly thus producing methane, a greenhouse gas 20 times worse for the environment than carbon monoxide.

She said graduates who leave the institution should have something to offer to the world in terms of reducing their carbon footprint.

“Wits’ aim shouldn’t be about intellectual standards only but sustainability as well.

“It starts here. The skills students get here are what they will take into the world.”

Wayman also called on the university to have a recycling website, recycling maps and even recycling events, such as a green week.

Wits’ grounds and waste management manager, Andries Norval, said awareness campaigns have been lined up for everyone at Wits, including the cleaning staff.

“We are trying to get permission from senior management to do recycling presentations in lectures and we are committed to see Wits leading all tertiary institutions in South Africa as far as recycling is concerned,” Norval said.

Universities around the world, such as the University of Sussex, have vibrant recycling initiatives which one can easily access on their website.

A group of Wits students has started their own branch of a non-governmental organisation, Generation Earth, which will be launched this weekend.

“Recycling should be a key part of Wits admin and the university should lead the students by example by having a greener mindset; a lot of people want to live green lifestyles but they just don’t know how,” said Generation Earth Wits president Michael Constantinides.

Wits has a recycling centre behind the DJ Du Plessis Building, West Campus and students are welcome to send their electrical gadgets there for recycling.