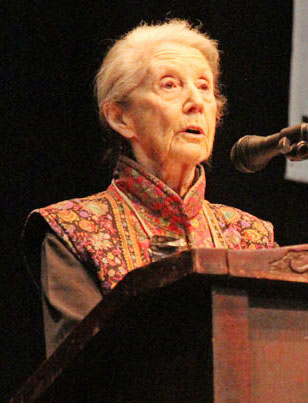 Dr Karen Lazar is a lecturer in the School of Education at Wits University. She based her doctoral research on Nadine  Gordimer and spent many hours interviewing the late Nobel laureate.

In the course of my feminist doctoral research on Nadine Gordimer, I interviewed her several times in her beloved  dappled garden  in Parktown, 2km from Wits.

In grey pants, black polo-neck and silver shawl in tune with the signature silver bob of her hair, Gordimer’s small elegant figure greeted me and took me through her stately  house into the garden for the interview.

Not one for hugging, she was nonetheless gracious and interested in not only giving opinions but hearing them.

Whilst chatting, she offered me sponge-cake with my tea, and enquired after my small children.

Interacting with Gordimer’s mind was like being in a vast  landscape as tall as it was wide, as brightly lit as it was sometimes sombre.

I felt her indignation at political corruption and intellectual dishonesty, her literary subtlety, her perfectionist commitment to writing many  hours a day in the private sanctum of her study.

Gordimer was not one to brook fools, bigots or lazy thinkers. Many readers and students of literature do not find her  intense and laden prose easy to pass through, but none will deny the robustness of her epic contribution to South African literature.

A loyal but critical South African, committed African, global writer that she was, Nadine Gordimer’s contribution to South African cultural life and thought will be long remembered.

The life of Nadine Gordimer

She was educated partly at home, and wrote and read widely as a child. She spent a year at Wits University as a young adult, and returned honorifically as a keynote speaker on numerous academic freedom and literary panels in later years.

Gordimer  received numerous awards in her 90 years, including the Booker prize in 1974, The Commonwealth Writers’ prize for the Best Book in Africa in 2002, and the Nobel Prize for Literature in 1991.

She is the only South African woman, to date, to win the Nobel.

Instead of complying with the custom of being walked down the carpet to receive her award in Stockholm by a member of her government, she chose instead to be accompanied by a literary comrade from her “government-in-waiting”, the ANC’S  (African National Congress) Mongane Wally Serote, this being 1991 and transition underway.

However, Gordimer was not a slave, then or recently, to any government’s agenda or promises.

Gordimer was the author of 15 acclaimed and courageous novels, numerous collections of short stories, and several collections of socio-cultural  criticism. Gordimer’s work has been prescribed in many school and university curriculae, internationally,where it has challenged, perplexed and sometimes annoyed students.

Professor Stephen Clingman from Amherst university in Massachusetts described her novels as “history from the inside”. Throughout her long literary career, Gordimer’s writing mirrored and problematised the changing tides of South African history and her own complex and self-reflective position in it.

Whether in the wide-ranging and ambitious prose of her novels, or the lucid, elegant prose of her short fiction, Gordimer’s sharp but sensuous language  delivered her vision.

Her writing was drawn to the endless manifestations of power, within and between individuals, between men and women, between communities, between ideas, between epochs.

The heady space of intimacy in her writing was permeated with a politics that could not be shirked. Gordimer always shunned human abuses and parochialism, be they racial or religious or any other kind, but never shunned her responsibility, as a person, to make these known.

And yet, as a writer she claimed, “my first commitment is to my craft”.