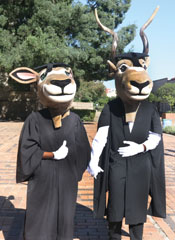 The annual Humanities Careers Expo was shunned by major companies after only two organisations showed up for the event on August 29.

Thabang Madileng  of the Counselling and Careers Development Unit (CCDU), which organised the event, said 13 different companies had booked for the expo but had simply not turned up. Only Robert Bosch indicated that they would not be able to attend.

“This year we tried to make it diverse by inviting employers from  non-governmental organisations, government and the private sector. We think they did not come because we did not attach a fee to the expo,” explained Madileng.

Humanities students felt let down and disappointed by the no-show. BA Honours (Media) student, Lethabo Malatsz said she was “not happy”.

“Im feeling discouraged, I’m having second thoughts. I’m thinking I wasted my time doing humanities. I’m doing my post grad now and was hoping I would find companies offering bursaries. I thought I would see YFM, SABC and News24 here. IT, Accounting, Commerce and Chemistry career expos had major turnouts.”

Madileng said there would be another general expo this year but not another one exclusively for the Humanities. Responding to questions about the poor response, Madileng said: “It’s a big concern. We market for all students but just struggle to find employers for our humanities students. Some companies have specifications, like engineers and accountants.

“Consulting companies usually take students from humanities but it’s mostly students who do Industrial Psychology or other programmes that are industry specific.”

Vega contact navigator, Palesa Mofokeng said the university should target companies that best benefit the students and invite those.

“It’s not that there is no demand for humanities students. It is just poor planning.  If companies are made to pay R500 to book their spots here, trust me they would be here because people always turn up when they are made to pay.”

Vega came to Wits to recruit post graduate students for the programmes the college offers. The second organisation that attended was the Avril Elizabeth Home for the intellectually disabled, represented by Linda Spangenberg and Jenny Ford. Spangenberg said the home was looking for volunteers to do their accounts as well as physiotherapists to assist the physically handicapped.

The fund was set aside by  Higher Education and Training Minister Blade Nzimande in his budget speech in May. The fund was created for students who have either been blacklisted or are in debt and cannot graduate because of their unpaid fees.

The fund will clear their debt so that they can find employment. Since the announcement, the Wits SRC says they are having difficulty reaching the students, and that no students have come forward to claim from the fund.

Wits SRC treasurer, Tshepo Ndlovu, says the reason behind this apparent lack of action on the part of the affected students is miscommunication from the department of higher education.

“The department itself did not inform institutions properly, so that they might create avenues where students could know about the fund.

“There were no posters, there were no adverts. At least in newspapers there should be something that alerted those graduates that [they should] go to the relevant offices or institutions so that they can source the funding.”

“They have to assist [and] promote that information. We thought that they would write to people who are affected,” he said.

The minister also encouraged the use of social networks in an attempt to spread awareness of the unclaimed funds. “The student leadership has to use their social networks to encourage their members to come forward and take advantage of this”.

Ndlovu says that they have begun to make efforts for those still in the university’s system.”We have lobbied the Alumni Relations office that we should try and track down the people who are still on the system and with outstanding fees.”

David Molehlane, 3rd year BA, says it was the first time he had heard of the fund. “I don’t even know who to call, the SRC, do I call the fees office? You see that’s the thing, they don’t even put the information out. That’s their problem.”