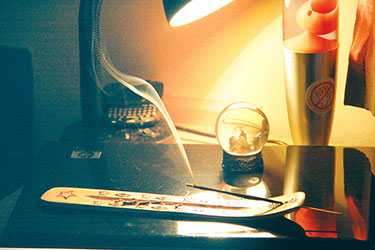 Puff and Pass: Wits Junction residents are using incense to disguise the smell of cigarettes and weed. Photo: Liesl Frankson

After receiving information that Wit Junction residents are irritated by the smell of incense in their corridors, Wits Vuvuzela investigated and found that students believe they have a drug problem more than a cultural intolerance to incense.

Neo Sekgobela, 3rd year politics, said the smell of incense is irritating but not overbearing, and is not reason enough to lay a formal complaint.

Pretty Mapaita, 4th year medicine, said she doesn’t mind incense as the students who burn it, do so in their rooms. Her issue is the students who smoke weed outside on the lawns. Her window faces the garden and when she opens her windows, the smell comes directly through.

“It’s annoying and disturbing. When you’re studying and open a window, you have the strong smell of weed. Weed happens often but incense once in a week or so.”

[pullquote align=”right”]“It’s annoying and disturbing. When you’re studying and open a window, you have the strong smell of weed. Weed happens often but incense once in a week or so.”[/pullquote]

Tawada Chisa, 2nd year BComm said he was first introduced to incense by his mother. She burns it around the house to chase away bad spirits. Chisa said the smell of incense is common on his floor.

“The majority of people in my corridor burn incense. The guy opposite my room is Indian so I get mine from him. “It’s like deodorant or oils or cologne.” Chisa said while incense can be used for its “soothing smell” and for cultural reasons, some students use it to mask the smell of cigarettes in their rooms.

Students are not allowed to smoke in their room, but the rule book doesn’t have any specific rules on burning incense, Chisa said.

Mcebo Olyate, chair of Wits Junction House Committee, said there haven’t been any formal complaints about the smell of incense but students do complain amongst each other in their corridors.

Olyate said Junction has some cases of people smoking in their rooms and few have been charged. He would not confirm what cases are being investigated and what was smoked but he said it would be difficult to stop the use of incense in residence rooms.

“People will say it’s their culture and religion. What we do is promote cultural tolerance.”