Two university students believe they have introduced a new culture, by creating “a vibe” around their newly launched brand, Kaus Kulture. 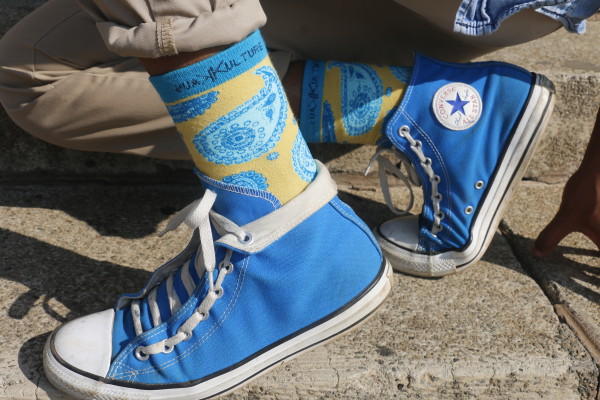 ITS NOT JUST SOCKS: One of the distinct designs by Kaus Kulture. Photo by Anelisa Tuswa

Two students, from Wits University and the University of Johannesburg (UJ) have combined heads to launch a new ‘culture,’ a Kaus Kulture.

Marcus Prime, 3rd year Architecture student from Wits, and business partner Kabelo Moabelo, from UJ, recently launched a range of socks, which they design and sell.

According to the two students, the idea of ‘socks’ came about during a conversation that they were having as friends.

Prime and Moabelo described their design elements of the socks as “a balance between class and sophistication … you could be a rebellious business man or your Wits student.”

Moabelo says he remembers seeing “an image on the internet that had a black man with a sign stating that ‘socks are the most needed but least donated article of clothing in homeless shelters’… this statement inspired me and Marcus to research into socks as a product.”

Even though their business is still operating in a “you call, we will deliver” environment, they have managed to sell their socks at a boutique in Braamfontein.

“But we are definitely hoping to open our own store soon,” said Prime.

Kaus Kulture’s business model depends on them creating a fashion buzz around the idea of socks and sock-wearing.  They pride themselves in creating an  appreciation for the small details in fashion culture.