by Zelmarie Goosen and Robyn Kirk 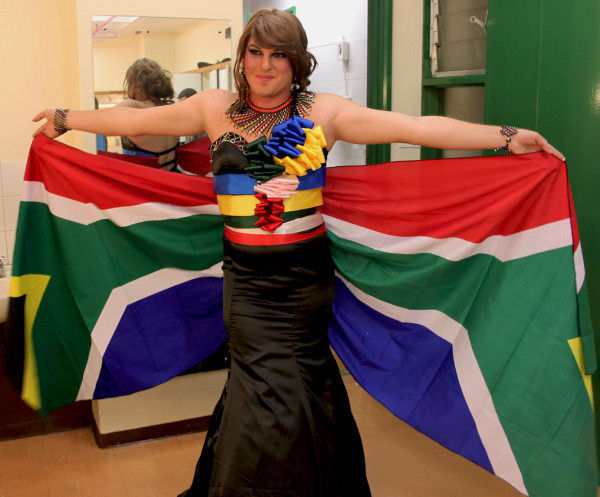 FLAUNTING IT: Miss Gay Jozi 2014 finalist Sjarmanté Diamanté showing off her first outfit backstage before the start of the show. She designed and made the dress herself. Photo: Robyn Kirk

Over the top make-up, fabulous dresses, and South African gay pride came to the Wits Theatre this weekend for the second annual 2014 Miss Gay Jozi pageant.

The theme of this year’s competition was a celebration of the country’s  20 years of democracy. The ladies did the first walk of the evening in a traditional outfit of their choice while Labelz performed Wakka Wakka, the song made famous during the 2010 World Cup.

“We basically do it [the pageant] within this month because on the 25th of May is Africa Day, so we want to celebrate and commemorate Africa Day and also show that us drag queens, and us gay people also are African,” said event co-ordinator Zsa-Zsa Whitney Gabor-Houston. “And we also believe in our country and believe in our rights and this is just a way of us expressing our rights as well as a gay community.”

Many of the organisers and finalists emphasised the importance of being proud of being gay and South African. “Be brave, come out, and don’t be afraid to explore,” said producer and director Dino Abrahams. “Don’t be afraid of who you are.”

Technical difficulties and wardrobe malfunctions meant the event got off to a slow start, but it was worth the wait. Along with Labelz several other performers wowed the crowd, including Divas of Drag, Ellah Elkenaza, Eldrid aka Mr. Carter, Sonwa Gxilishe, Foxy and Rosslyn Van Der Woodsen Bass.

The road to Miss Gay Jozi started with auditions of 25 hopefuls. The number was cut down to 12 finalists for Saturday night’s show, and throughout the evening only six made it to the final round.