END_OF_DOCUMENT_TOKEN_TO_BE_REPLACED

This week the Wits EFF caused a stir when they criticised the university  for shifting its’ responsibilities to the the SRC and have called for ‘no SRC’.

“The university does not listen to students so the SRC is a body that is meant to legitimise the university because the statute requires every institution of higher learning to have an SRC,” said Wits EFF secretary Mbe Mbhele.

“We feel like at Wits it is just there so that university can be a legitimate body but it does not necessarily change anything. It is also strategic move on the part of the university because they are always shifting responsibility.”

Mbhele made his comments to Wits Vuvuzela on Tuesday afternoon shortly after Wits EFF stopped the election debate by singing and toyi-toying on the stage. The debate was called off and a fight broke out between members of Project W, Progressive Youth Alliance and the Wits EFF on the Great Hall stage.

Mbhele said Wits EFF would continue to protest the SRC campaign and prevent the elections from taking place.

“We are going to go there and kick the ballot boxes and the IEC is not going to be able to count the votes,” said Mbhele.

Mbhele said the university has relied heavily on the SRC to help students through initiatives such as One Million, One Month, a fundraising drive for students who did not receive funding the National Students’ Financial Aid Scheme at the beginning of the year.

Mbhele said that the university should pay for student’s fees and accused it of paying bonuses to “[Vice Chancellor] Adam Habib and his minions.”

Mbhele said the lack of bus services for Wits students to taxi ranks at Bree and Noord were one example of how the SRC was unable to serve students.

“The bus issue has been raised in 2005 and in 2015 students are still complaining about the bus, 10 years later,” Mbhele said.

Mbhele said Wits EFF will use any means possible to force Habib to take their demands seriously.

After all that was said and done, Mbhele concluded the interview with these words “fuck Habib”. 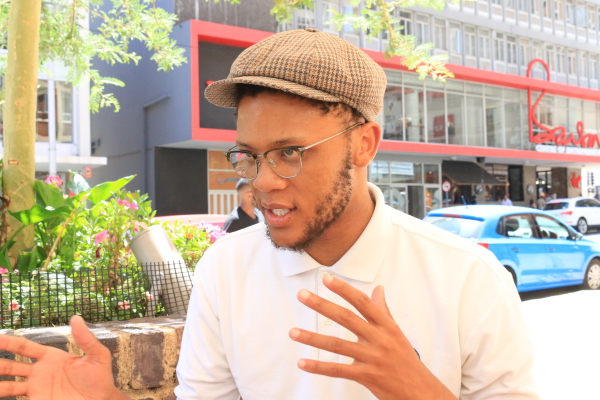 Wits Vuvuzela and the Wits Journalism department have been criticised after exposing a student politician who had been falsely claiming to be a member of the prestigious family of struggle hero Walter Sisulu.

Head of Wits Junction house committee Mcebo Freedom Dlamini had claimed to be “Mcebo Sisulu”, the grandchild of Walter Sisulu. Last week, he admitted to Wits Vuvuzela that this was not true and said he used “Sisulu” as a “stage name” or “when I’m excited”.

Reactions from the Wits community ranged from demanding Wits Vuvuzela to retract the article and issue a public apology to thanking the publication for revealing the truth about Dlamini.

“Of course we are aware that Wits Vuvuzela is ran [sic] by non-apologetic white racists,”

“We are unequivocally perturbed by Vuvuzela‘s degenerated and haphazard journalism which … has ‘transformed’ overnight into a publication-wing of the department of home affairs,” Wits Sasco said in a statement issued early yesterday morning.

Wits Economic Freedom Fighters (EFF) co-ordinator Mbe Mbhele said in a statement that the publication of the article during exam period amounted to “malice” towards Dlamini.

“Of course we are aware that  Wits Vuvuzela is ran [sic] by non-apologetic white racists,” said Mbhele. “Who used two aspiring black journalists to defame and smear  the character of a fellow student.”

“I personally don’t feel or have ever felt controlled by them. They really don’t impose themselves in the day to day running of the paper or the publishing of stories online,”

Wits Vuvuzela journalist Rofhiwa Madzena, one of the writers of the expose on Dlamini, rejected the accusations by Wits EFF.

“I personally don’t feel or have ever felt controlled by them. They really don’t impose themselves in the day to day running of the paper or the publishing of stories online,” Madzena said.

“Their role is essentially to equip us with the resources and the understanding of how we are supposed to put stories together,” Madzena said.

“The rest is up to us in terms of finding stories and putting them together.”

The Wits Journalism department has defended Wits Vuvuzela for its publication of the article on Dlamini.

“The story is a valid, well-researched news story, showing that a student representative has been misrepresenting himself to the student body and the campus community,” said Krüger in a statement on behalf of the department.

Krüger also rejected the accusations of racism made against the department by Wits EFF calling them “unfounded”.

“Accusations of racism leveled at members of our department are simply an attempt to divert attention from the real issue, which is: our students produced a piece of good journalism of great public interest to members of the student body,” Krüger said.

Some students and student organisations have taken to Twitter to call for a boycott of Wits Vuvuzela.

“@WitsVuvuzela must be boycotted. They are failing to intellectually stimulate students of the 2nd best university on the continent,” said  former SRC president Sibulele Mgudlwa (@Sibulele_).

However, along with the criticism, there has also been support from the Wits community on social media.

“I thought the article was well written and researched. I wouldn’t know why someone would criticize the publication of something that important,” said Witsie Houston Austin Muzamhindo on the Wits Vuvuzela Facebook page.

Some students said they believed the article was important because Dlamini is a student leader and he must face the music for his false claims.

“If you are going to lie, stand for it and eventually fall for it. Not all students disagree with @witsvuvuzela,” @2_Miza tweeted, yesterday afternoon.

For the full statement by the Wits Journalism department, click here.

Q & A with Mbe Mbhele

As the new kid on the block, the Economic Freedom Fighters (EFF) have been getting a lot of press—good and bad- fighting to become a recognised society at Wits. Roxanne Joseph spoke to Mbe Mbhele, the coordinator of Wits EFF, and asked him…

What are your thoughts on a possible coalition between the Democratic Alliance (DA) and the EFF?

I don’t think it’s possible, because the DA fundamentally stands opposed to everything the EFF stands for. As Julius Malema said, “the EFF has only one objective in these elections, and that is to win.”

Are you a recognised society yet?

We are now a recognised society on campus. We applied and the SRC approved our application a week or two ago. SRC president Shafee Verachia stated we are now an official society at Wits.

What do you think of the SRC’s initial reaction to the EFF’s application?

The SRC stated they would not allow us to be a recognised society. They were hostile towards us and still are because we threaten the same constituency that they represent.

In the upcoming SRC elections, are you going to put candidates forward and what’s your plan in doing so?

Our conditions on the ground will determine whether or not we have EFF people in the elections. I don’t see a reason why not, though. We are for the advancement of students and in order to achieve the objectives we want to achieve, such as free and quality education for all, we need to operate within the structures [at Wits].

What do you think your presence has been like on campus and what are your plans for the next two weeks, in the run up to the elections on May 7?

We’ve been doing a lot of door-doors. Each and every conversation that we have involves campaigning and canvassing to vote for the EFF. There is a possibility that national leadership, like Floyd [Shivambu, EFF Commissar and Chief of Staff] will join us in our visits and on campus.

Does the PYA still have a presence on campus?

I think it’s unfair to speak of them, as we are focused on our own objectives, but I have not seen the PYA on campus this year. We, on the other hand, have been present and achieved things for students. For example, we opened up applications for all clubs and societies who were also denied recognition.

Do you think that will get you more votes?

Look, the response has been overwhelming. You walk around campus in your red beret and people come up to you, they want to know what the EFF is all about. We will get a lot of votes from students, as a microcosm of society.

Sell the EFF to students and young voters out there.

The EFF recognises that before we are students, we are members of communities. We are only in university for four years, but then we go out and get jobs in the real world. We need to be active participants in the economy, so our presence is not just within the borders of university. We stand for free and quality education for all, which directly relates to all students. The price of education is being commodified and students cannot afford a decent meal in the Matrix because it is outsourced. There are many issues we want to deal with on campus.