Hudson was celebrated as teacher, colleague and friend END_OF_DOCUMENT_TOKEN_TO_BE_REPLACED

The EFF showed its solidarity with Palestine in a gathering on the Wits University campus earlier today.

END_OF_DOCUMENT_TOKEN_TO_BE_REPLACED 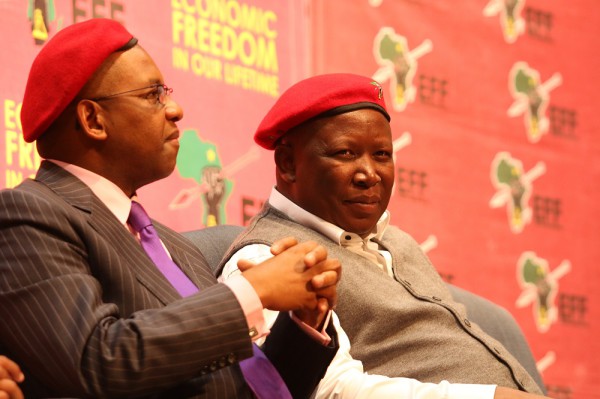 “We do have supporters on campus. Most [of them] are people in the SRC, ANCYL and the YCL [Young Communist League], and members of the PYA [Progressive Youth Alliance],” Thombothi said.

He said it was difficult for “comrades” to come out and admit they were members or supporters of the EFF because they still had to serve their elected official terms in their respective organisations.

“They are still deployed in the PYA. There’s a conflict of interest. Maybe after the PYA elections  [in August]. Most can’t disclose now. EFF is here, it is in Wits,” Thombothi said.

It is a leftist movement whose policies include land expropriation without compensation, nationalisation of the banks and national resources, free education and health and opening South African borders to Africans.

[pullquote]”We do have supporters on campus. Most [of them] are people in the SRC, ANCYL and the YCL [Young Communist League], and members of the PYA [Progressive Youth Alliance]” [/pullquote] SRC treasurer, Justice Nkomo, however, said the EFF had no support at Wits. He said the EFF  was holding an event at Wits but had to cancel it because most Witsies attended a talk by ANC secretary-general  Gwede Mantashe.

“They wanted to infiltrate. If EFF was strong, they would be able to influence our own people,” Nkomo said.

“Those people who have crossed have always been politically irrelevant.”

Trevor Mkhawana, 2nd year Mining Engineering, said he knew a lot of people who support the EFF. “They believe in Malema. They got disillusioned by Zuma.”

Witsie Mabhoko Mojela said if the EFF won the 2014 elections, SA would turn into a banana republic.

“[But], the presence of Mbuyiseni Ndlozi, [EFF spokesperson] allows me to give EFF the benefit of the doubt. I trust his intellectual opinions and the good work he has done in the student organisations on campus.”

She said South Africans are always welcome in other African countries.

Other Witsies in the EFF include Floyd Shivambu who is studying his MA in political studies, Andile Mngxitama who has completed an MA in sociology and Ndlozi, a PhD politics candidate.