Crime on the increase outside Health Sciences Campus

THE WITS Health Sciences community has been hit by increased levels of crime just outside the Parktown campus since the end of last year, according to security guards.

David Mlambo, an external perimeter security guard from Protection Services, said that pedestrians with cellphones were being targeted as they walked along York Road, but recently, there had also been incidents of motor vehicle theft and robberies.

There is at least one incident of theft, or attempted theft, every week, according to Mlambo. He said, they had foiled an attempted theft of a Toyota Etios one day at the end of February but a Toyota Yaris had been stolen the very next day.

“You know, criminals are clever. I have noticed that these criminals move around checking or monitoring us, the security. It is very bad. We are all not safe,” he said.

Mlambo’s sentiments were echoed by Peter Selowa, an independent car guard, who said incidents of crime in the area had increased since the Hillbrow Police Station had cut the frequency of patrol cars.

“The police also need to play a big role. They must be visible. I think it might help,” said Mlambo.

Third-year medical student Revaan Singh was attending Awareness Day at the Medical School on March 6, when his Toyota Yaris was stolen from a parking bay on York Road.

“I walked out to go home. I was in disbelief as I approached the space where I had parked not to find my car there. At that point I knew that it had been stolen,” said the 25-year-old.

Toni Batty, a fourth-year BNurs student, said that she wished someone had warned her about the severity of crime in the area.

“Parking my car outside gives me anxiety, not only for the risk of car theft or smash-and-grabs, but also for my own safety, walking to and from my car before and after class,” Batty added.
Director of Family Medicine Dr Richard Cooke said that he was mugged in the area last year and that had made him more cautious.

“I am very vigilant now. I’m always a bit nervous walking up that hill. My main concern is not for individuals like myself, to be frank. I am concerned for smaller and, more predominantly, female students.”
Wits security staff have advised that people should avoid using cellphones in the street, that they walk in groups, and avoid leaving valuables in plain sight in parked cars. 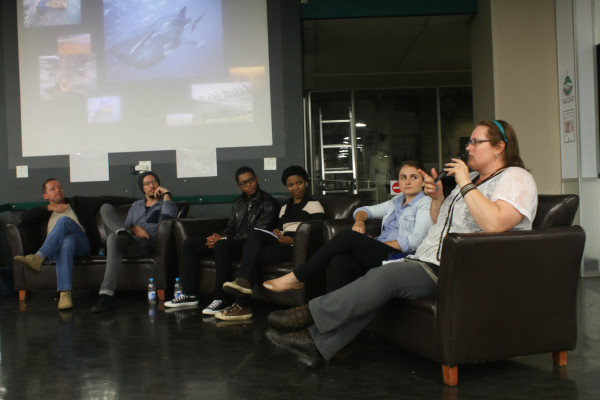 Medecins Sans Frontieres, or MSF, came together for a “Bed-time stories” evening to share their work experiences.

“Bed-time stories”, an event hosted by Wits Friends of MSF and the Nursing Students Council brought together workers who shared their personal experiences of working for MSF.

Many of the workers confessed that the unpredictability of their work is one of the main reasons they choose to work for MSF.

“You never know what a situation will throw at you, that’s half of the excitement and half of the fun,” said Claire Waterhouse,  a project administrator for MSF who just returned from Liberia.

Even though field workers are trained to deal with different situations you can’t be prepared well enough and can’t predict what will happen, said Waterhouse.

Ainsile Mclartly, a field nurse who recently returned from Afghanistan, said that she loved the craziness, adventure and unpredictability of her job.

Mclartly said that often MSF workers are short of necessary medical equipment which forces them to think creatively and improvise in using what is available for medical procedures.

Working for MSF can also be dangerous as field workers are sometimes sent to conflict areas.

While in these zones Waterhouse said that, “They [MSF] do a good job of keeping you safe and secure the whole time”.

“There is no such thing as a safe environment”, said Dan Sermand, previous head of mission and field HR (human resources) recruiter for the MSF Braamfontein office.

To be able to work in such places you need to be neutral and impartial when interacting with both sides. “That is your bullet proof jacket,” said Sermand.