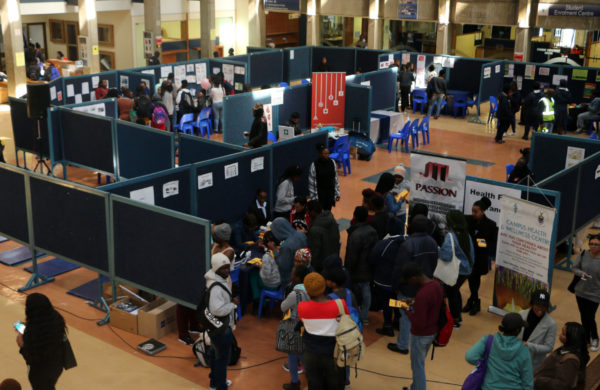 The students offered a number of healthcare checks including dentistry, dermatology, eye testing and physiotherapy.

The event which was hosted by Jesus Christ To All Languages (JTL) society together with the Wits Campus Health and Wellness Centre (CHWC) also provided services related to specific men’s and women’s health issues along with dietary and chronic conditions.

Participants were also able to donate blood and make use of aerobic and resistance training stalls.

Final year Bachelor of Medicine and Surgery student, and leader of the JTL society, Hennah Mungure, said that convenience plays a major role in people checking up on their well-being. The 24-year-old told Wits Vuvuzela, “Students have many questions about health issues but do not necessarily go to the doctor to find out or get answers.”

The acting head nurse of CHWC, Sister Maggie Moloi, told Wits Vuvuzela that male healthcare was one of the priorities at the fair. The CHWC have partnered with Wise Up, an operation which focuses on Voluntary Male Medical Circumcision (VMMC).

Dr Lubwana J. Kigozi from the VMMC project, who was also present at the fair, said that the aim of his organisation is to ensure that males are given knowledge about their medical healthcare so that they can voluntarily go for circumcision which is shown to reduce the “risks of acquiring HIV by 60%,” in males.

The high cost of health is one of the factors preventing students from getting regular health checks. “The only option left for students is to go to the public sector which can be a tedious process because you cannot wait an entire day when suffering from sinusitis,” said Mungure.

“Some of us do not have enough money to go to campus health, so this fair makes it easier,” said Dimakatso Hlahlu, a Wits second year geology student.

“I wouldn’t necessarily go to the doctor to check up on my health because the medical aid does not pay the full amount and I would have to top up,” said Yenzokuhle Hleta, a second year Wits mechanical engineering student.

Moloi added that ignorance also prevents students from thinking about their health. “Students tell themselves that they are only here to study and don’t have to look after their health. In the long run they end up with high blood pressure with the stress they get from studies,” Moloi said.

Brown was Wits to give a talk about career opportunities for aspiring journalists. He addressed an intimate group of students at the Wits Journalism department. The seminar was organised by in part by the Media24 graduate programme which offers bursaries to journalism students.

Don’t be an editor

Brown, who has worked as an editor since 2001, told students not to become editors—which had the audience gasping, until he justified his controversial statement. The term ‘editor’ was becoming outdated because it describes those who supervise production and aren’t directly involved in news stories.

“Don’t be an editor. Become an auteur,” he said. Brown said an auteur was better as it described people who were more interested in the production of information.

The media landscape is rapidly changing. He encouraged students to always be willing to learn new skills to be able to keep up with the changes. He said regardless of the changing media landscape, journalism was still about a good story. [pullquote align=”right”]Your Twitter stream is your CV[/pullquote]

“It’s still about great journalism, great writing and a great story. A great story can be about anything, as long as it’s well written.” Brown emphasised the importance of journalists adhering to a brief, knowing their target audience and doing thorough research.

Most important for Brown, were people who were able to meet deadlines. “Don’t ever miss a deadline. Most people ask me: ‘How can I write for you?’ And I say: ‘Don’t miss a deadline.’”

He said students should always seek out internships even if these were unpaid.“Work for free. Start small. Very few of us landed our dream jobs but you’ll always learn something.”

Brown worked for Cape Times early in his career. He said he hated newspapers but it was a “damn good experience”. He said he stuck it through because it was a stepping stone to getting him to his dream job.

Brown also gave advice on professionalism in the work place, specifically for the media industry. He said social media was a tool which prospective employers used to find out more about potential employees.

“Your Twitter stream is your CV. I can read your timeline and easily know if I want to hire. Follow smart people on Twitter.” Brown said the best writers and journalists were those who read a lot of literature.

He encouraged his audience to read “great books, blogs and magazines”.