END_OF_DOCUMENT_TOKEN_TO_BE_REPLACED

Wits University’s mining engineering school is ranked the highest in Africa and 13th in world in the 2019 Quacquarelli Symonds (QS) World University Rankings.

Last year Wits ranked 15th, whilst in 2017 it was positioned 22nd on the QS rankings. The rankings are based on a combination of metrics that include academic and employer reputation, student-to-staff ratios, proportion of international staff and students, and citation rate.

“Wits Mining is the largest mining school in Africa. It has a very expansive postgraduate programme and has a sizeable portion of international staff and students,” said Kelello Chabedi, senior lecturer at the Wits School of Mining Engineering.

Students currently study within the school were chuffed by the achievement.

“It is a pleasure to attend one of the top mining schools in the world”, said 22-year-old Innocent Sithole.

Third-year student, Minenhle Khumalo, said that there has been a decline of mining engineering graduates being taken into the mining industry.

“With us moving up in the ranks of the world and being the top school in Africa, obviously it will attract the industry’s attention,” Khumalo said.

“I think it is the way in which our curriculum is structured. Our degree includes honours, so it prepares us for things that other mining engineering students are not taught in their curriculum,” Khumalo added.

“Our chances of employment will be drastically higher everywhere in the world because the industry now knows that we are competent enough,” said Mashudu Tlhatlheji, another third-year mining engineering student.

Editor of Mining Weekly, Martin Creamer, told Wits Vuvuzela that, “It is encouraging to see that the Wits School of Mining Engineering is playing its role in a manner that has attracted the attention of the QS World University Rankings.”

“The school’s progression is very pleasing and coincides with the Fraser Institute’s higher ranking of South African mining industry as a whole,” said Creamer.

The Fraser Institute is an independent non-partisan research and educational organisation based in Canada.

“South Africa has an Aladdin’s Cave of metals and mineral riches that are estimated by the Citibank to be worth more than R32 trillion. The best way to ensure that this substantial endowment benefits all people of South Africa is by equipping South African students well enough to be able to extract our wonderful national minerals,” said Creamer.

END_OF_DOCUMENT_TOKEN_TO_BE_REPLACED 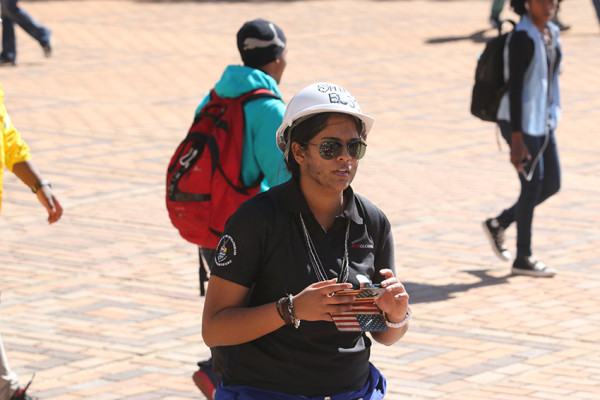 Today, mining engineering students at Wits celebrated Miner’s Day by gathering outside the Great Hall in their mining attire. They stood in solidarity with all miners, displaying placards and singing struggle songs throughout the day. Wits Vuvuzela spoke to some students, including the Mining Engineering Society’s president, Prianka Padayachee. 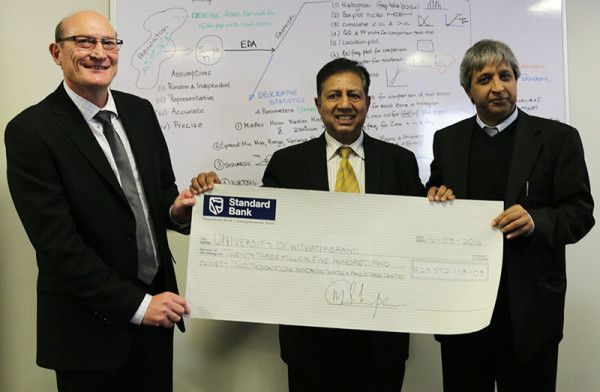 The School of Mining Engineering has become the recipient of a R23.6-million cash infusion—most of it for new bursaries—courtesy of the Mining Qualification Authority (MQA).

Celebrating a partnership going back to 2005, the MQA handed the School of Mining Engineering a R23.6-million cheque for investments in mining education during a ceremony on Friday.

Most of the R23.6-million will provide full bursary funding—which includes tuition, accommodation and allowances—to 236 students.

“About 50% of students enrolled for mining and minerals qualification drop out of their studies due to financial constraints. Today we are here to make a small contribution towards financial assistance of these students. I hope that this partnership will continue to make a meaningful contribution in the eradication of poverty in our country,” said MQA chief financial officer Yunus Omar.

In addition to the amount provided, the MQA had already given the school R100 000 in support for the school’s program for needy and deserving students.

“We often have students who come here and say we can’t see the white board, or we don’t have food. So we then use this strategic money, in a strategic way towards needy and deserving students,” School of Mining Engineering head Prof Fred Cawood said.

“We look at the candidate; we make an assessment to see whether the money will make the difference. If the money can cause these students to pass at the end of the year, then we allocate.”

Postgraduate students in the School of Mining Engineering will also receive funding for their research projects out of the new donation to the tune of R100 000.

Vice Chancellor Adam Habib thanked the MQA for the donation and reflected on the historic challenges of economic disenfranchisement in society, stressing the need for co-operation between institutions.

“This particular partnership is testimony to what can be done…it creates hope by providing bursaries to students who are particularly disadvantaged,” Habib said.

“Not only do you provide resources for covering the training of students who do not have the resources under normal conditions, you also simultaneously create incentives for your industry. But even more importantly you create hope in society,” said Habib. 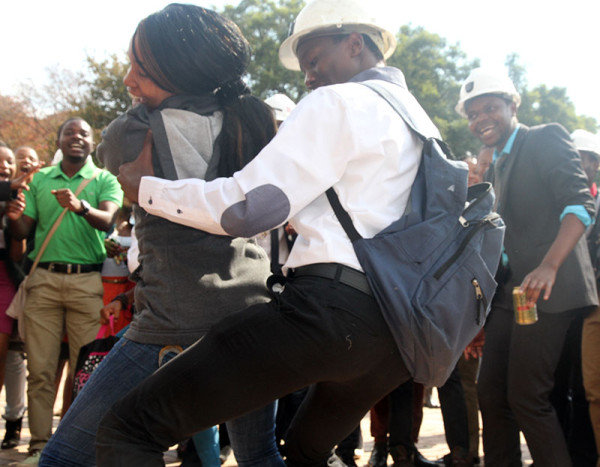 The Wits student mining engineering society, dressed to the nines as they suited up and “heeld” up for Mine managers day this afternoon outside the Great hall, in order to celebrate the role of Mine Managers. The students celebrated, by dancing and singing a. Mining student Rafael Kulumba said the idea was to promote management, as they aspire to be like mine managers one day and too show everybody else that our faculty is “Still number one” .