WITH AUDIO: A bridge too far? Mixed reactions to the Sibanye-Stillwater infinity bridge

The Amic Deck will be renamed The Wits Sibanye-Stillwater Infinity Bridge in October 2022.

END_OF_DOCUMENT_TOKEN_TO_BE_REPLACED

A group of Witsies, collaborating with international scientists, have made groundbreaking discoveries that could change the way we view the origins of life.

END_OF_DOCUMENT_TOKEN_TO_BE_REPLACED

Sibanye Stillwater donates seismic data to the only institution in southern Africa with a geophysics programme. END_OF_DOCUMENT_TOKEN_TO_BE_REPLACED

Stats SA show that there has been a -4 000 annual change in the number of employees in mining and quarrying industry.

END_OF_DOCUMENT_TOKEN_TO_BE_REPLACED 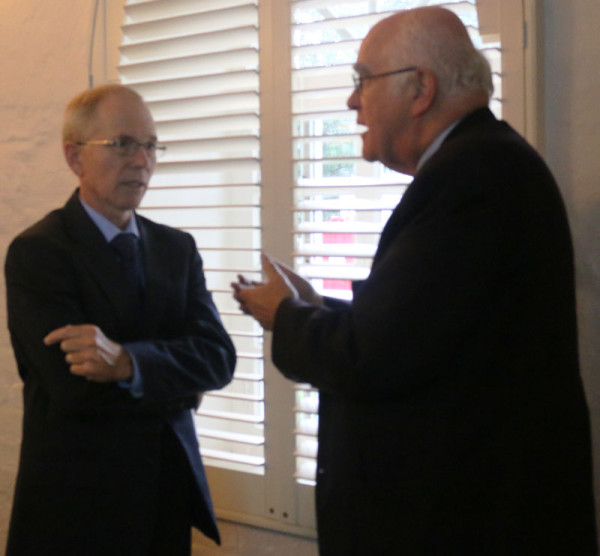 [pullquote]The worrying trend in the post-Marikana era is that there has no been greater consensus that the law does not offer solutions to bypassing situations[/pullquote]
“Dissatisfaction can have a number of causes, which thread the problems that face trade unions”, said Macun.

Just a few kilometres away from Wits – in Hillbrow, the African immigrant heart of golden Jozi – a group of more than forty-five feminist activists and researchers from across Africa, and other parts of the world are gathered to talk about what is now being called ‘extractivism’. The impacts upon women are extreme, especially on our continent, justifying a new network, WoMin, to link resistance.

Extractivism refers to the now dominant neo-colonial model of ‘development’ in many poor countries. It is characterised by the extraction of vast quantities of non-renewable natural resources – minerals, oil, gas, and old-growth forest products – as well as the abuse of other resources including water. These are typically extracted for export from local and regional territories to the Global North and to the new BRICS (Brazil-Russia-India-China-SA) bloc.

Extractivism is a model of development which is characterised by vast social and environmental destruction, including climate change, where South Africa joins oil exporters as one of the major villains. The costs of extractivism are principally borne by workers and affected communities, which in its current form foments violence, conflict and deep inequality.

It is apt that critical conversations between African activists about this extractivist model are happening in Jozi, a city whose buildings and advanced infrastructure were constructed from vast profits accumulated by mining capital off the exploitation of irreplaceable mineral riches by the cheap labour of black men and the invisible unpaid labour of women. The workers came from across Southern Africa. [pullquote align=”right”]Extractivism refers to the now dominant neo-colonial model of ‘development’ [/pullquote]

Wits alumnus, Harold Wolpe, made the argument forty years ago that a racialised system of migration from apartheid’s Bantustans and neighbouring European colonies characterised the mining sector, helping mine bosses by eliminating the need to pay a family wage because women at home would raise children and look after sick workers and pensioners with very little state support under the capitalist social system. Wolpe concluded that apartheid capitalism was able to thrive by paying black workers a wage “below [their] cost of reproduction” with the balance of these costs sustained through the unpaid care of black peasant and working-class women.

Good thing we got rid of apartheid – and with it, migrancy! Or did we?! As so many learned from Marikana, the underlying logic continues to this day. In this contemporary period the site of exploitation of women’s unpaid labour is no longer just the rural village, but the vast informal settlements that house the mineworkers and their primary or secondary families, where women with few services and little state support feed, clothe, and care for the workers and the next generation of labourers, many of whom will be surplus to the requirements of capital. And the men still evade the irrational 1885 Berlin-treaty borders; they come to SA mines from across the region – many more immigrants have come since 1994 – with their rural women still super-exploited.

[pullquote] Women bear the brunt of extractivism’s environmental and social costs[/pullquote]The women visiting us are from places such as Nigeria, Ghana, Zambia, Ecuador and Canada, where both social and environmental devastation also accompany extractivism. We visited communities in Witbank and Carolina, where people are ill from the acid-poisoned waters and where farming lands are sterile after decades of coal mining. We spent time with communities in Ekurhuleni where children suffer from respiratory health problems and eye disorders, and communities live in shacks bordering onto slimes dams, the toxic waste repositories of mining companies and other industries.

This environmental destruction leaves women most susceptible, because of the division of labour which makes them primarily responsible for provisioning safe water for their households (and who endure great stress and worry when they cannot do so) and exposes them to the poisoned waters as they wash, take care of family members and process and cook foods.  Peasant and working class women bear the brunt of extractivism’s environmental and social costs – the companies ‘externalise’ these – and yet they enjoy none of the promised benefits of jobs and ‘development’.

WoMin, which is hosting the dialogue and strategy meeting, is housed in a regional alliance of organisations working on land and natural resource issues, and is closed allied to the Wits Sociology Department’s Society Work and Development Institute (SWOP). SWOP has a rich history of support and solidarity to workers and their struggles and continues this fine tradition in its work alongside WoMin. Together they provide a research platform that considers extractivism, especially its gendered features.

The planet and our continent need us to turn away from destructive extractivism. The route beyond requires knowledge gained from, and in support of, the grassroots and coal-face women now building a movement to force society to consider the alternatives!