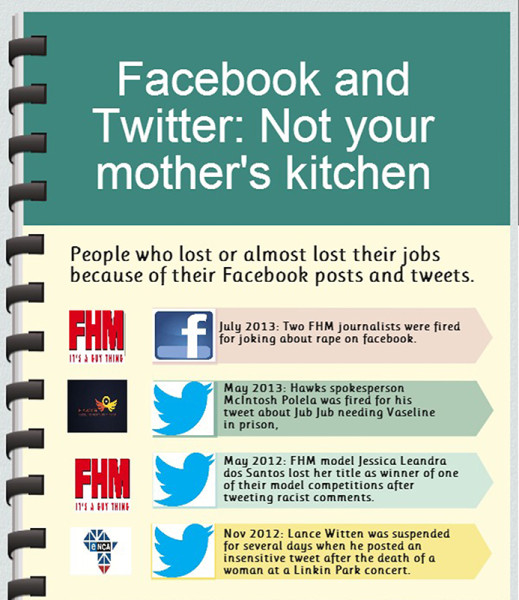 Beware: Tweeting or posting controversial or insensitive comments on Facebook could cost you your job.

Two FHM journalists recently fired because of a Facebook post where they  made jokes about rape, demonstrates a lesson about social media every student should be taking note of.

Max Barashenkov, former FHM features editor, posted on his Facebook page: “I propose correctional rape and sterilisation for any white person who twerks.”

Some people took issue with Barashenkov’s comments on correctional rape. Editorial assistant Montle Moorosi responded to their complaints, joking: “I think rape can be quite fun if executed in a romantic manner. Like saying ‘I love you’ before you slip a roofie [a  date rape drug] in her Earl Grey tea.”

Screengrabs of the Facebook posts were  then taken by people upset by the comments, and circulated on twitter.

The two journalists were fired less than a week later.

This incident shows how easy it is for anyone to get into trouble for carelessness on social media.

Balliah said because social media was still at a point where it was largely unregulated, people did not pay enough attention to how they conducted themselves: “While people realise that there may be repercussions they still feel comfortable that what we put out there should not be held against us.”

According to Balliah, people need to realise that what they put online is shaping perceptions about themselves. Potential employers are likely to go online to gather information about them.

University students often fill their social media sites with pictures of themselves dead drunk or with other posts that would get potential employers to question their character.   [pullquote align=”right”]”Nothing online is private or confidential”[/pullquote]

Balliah said that on social media one does not have the ability to provide context and justify oneself.

“In essence you are putting out an image of yourself.”

And don’t think privacy settings will help you. “Nothing online is private or confidential, even if it says so,”  Balliah said.

The two journalists wrote an open letter to the public apologising for their comments.

In the letter they said people must take into consideration that the Facebook account was a private one.

Balliah said people should conduct themselves in a way that, if their grandmother or boss were to confront them, they would not be shy to talk about it or explain themselves.

“You don’t want, while you are at university, to be generating content that will be used against you in the future and form part of your online archive for the rest of your life,” she said.